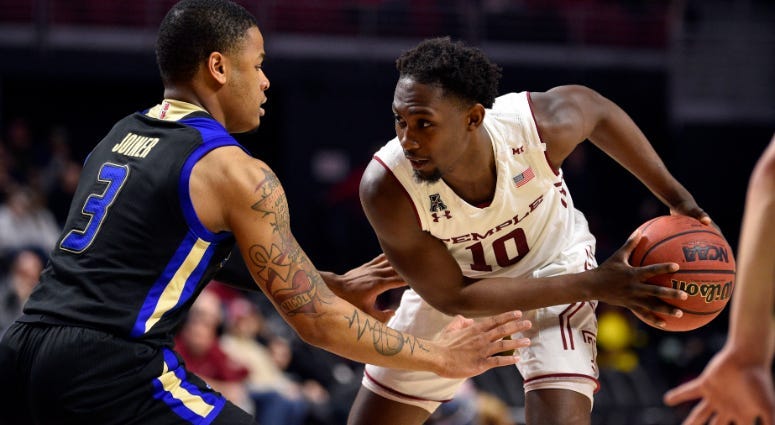 PHILADELPHIA (KYW Newsradio) — For the Temple Owls, every game could make or break their NCAA Tournament resume.

With two regular season games remaining, the Owls have fluctuated in the bracket projections over the past few weeks.

It has been like the stock market for the Owls with the up and down nature of the NCAA Tournament bubble. Some weeks, the Owls are a lock. In others, they are on the outside looking in.

Temple will play UConn on the road Thursday, followed by a showdown with 25th ranked UCF on North Broad Street on Saturday.

RELATED: Sixers are No. 1 for NBA attendance

Coach Fran Dunphy is hoping his team will embrace the moment of what the week has to offer.

"We talk about how lucky we are to be playing college basketball at any time," said Dunphy. "We've got a big week facing us. We've got a great opportunity to see what we can do to play our way in. This is an awesome opportunity. I'm just hoping they think about that every single moment this week."

While the game against UCF may be the bigger NCAA resume builder, Temple needs to take care of business at UConn.  The Huskies are 14-15, but UConn's record is a bit misleading.

Danny Hurley's squad is coming off an impressive victory over USF and has played some of the American Athletic Conference leaders down to the wire in recent weeks.

Overlooking the Huskies will hardly be a problem for the Owls.

"They're very good," Dunphy said. "Obviously, it's a different coached team. Danny is doing a terrific job. They just had a very close game the other day but they survived and did what they needed to do. They've had their share of injuries, but I think Danny has done a terrific, terrific job. We'll have every challenge facing us on Thursday."

UConn is especially tough at home. Despite being under .500 overall, the Huskies are 13-4 on their home court this season.

The Owls must deal with a raucous atmosphere on Thursday. Guard Shizz Alston, Jr. said executing on offense will also help the Owls defensively as they look to silence the Connecticut crowd.

"Coach always talks about how our floor balance is better when we take good shots," said Alston. "When our offense is good, we know we're a pretty dangerous team. When we're missing shots, our defense struggles. We have to pick that part up."

The math appears simple for Temple. If the Owls win their last two regular season games and possibly one more game at the American Athletic Conference Tournament, there is an excellent chance they will playing in the NCAA Tournament.

It will be up to Alston and his teammates to keep their focus and to take advantage of their opportunity.

"You can enjoy it," Alston added, "but when you're winning, it's a lot more fun. You can't really enjoy it when you're losing. If we're winning, everything will be good and we'll get into the tournament. If we lose this game, our chances are probably slimmer."