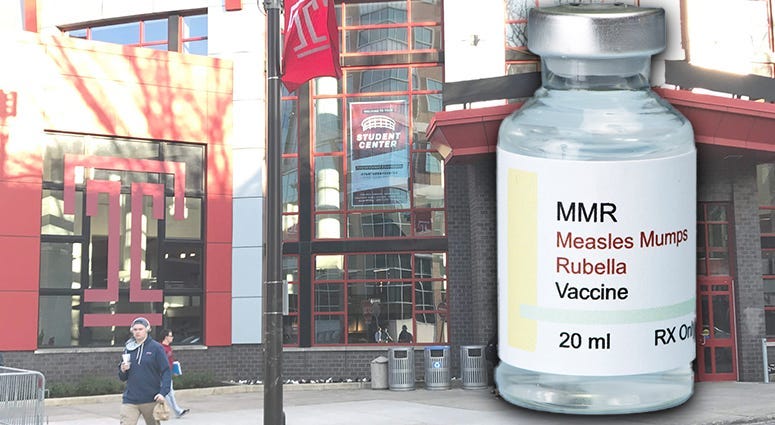 PHILADELPHIA (KYW Newsradio) — Over the last month, dozens of confirmed and suspected mumps cases have popped up at universities and schools in Philadelphia, with Temple University serving as ground zero for the flare-up.

As Temple officials work to clear the viral infection from campus, a new policy has been implemented to prevent the outbreak from happening again.

As of Monday, 18 students have tested positive for the mumps, according to the university, while another 98 are listed as probable.

University spokesman Ray Betzner said last week, nearly 5,000 students, faculty and staff were vaccinated with the measles, mumps and rubella (MMR) vaccine, which was offered for free on campus.

As a result of the rapid outbreak, Betzner said the school has a new rule going forward to make sure incoming students are not and will not put anyone at risk to contract mumps.

"We will be requiring proof that students have had their vaccinations before they enter," he said, beginning "in the fall of 2019."

Those immunization shots include mumps, chickenpox, diphtheria, tetanus and pertussis.

"Those are the standard kinds of vaccinations that folks have as children, and those are the kinds of things we're going to be looking for," he added.

Cases of the mumps were also reported at Drexel and Penn. Both universities, however, already require immunizations ahead of joining the campus.