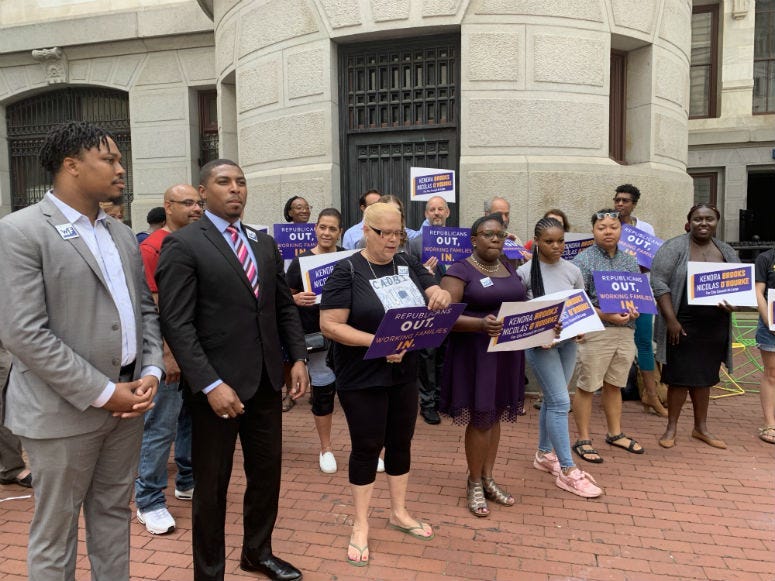 Kendra Brooks and Nic O'Rourke filed twice the number of signatures needed to get on the ballot, which Brooks says shows their pro-public schools, justice reform and Green New Deal agenda has traction.

"I'm proud to say that we had over 130 volunteers across the city, volunteers gathering signatures for us to get on the ballot," Brooks said.

But this campaign is to unseat the two Republican at-large council members, they said.

The city charter guarantees minority party representation by allowing parties to nominate no more than five people for the seven at-large seats. Republicans usually win the seats with less than 40,000 votes, which Working Families operative Vanessa Clifford thinks Brooks and O'Rourke can surpass.

"We are running a massive operation where we really unify progressives across the city," Clifford said.

"Giving these two seats away to people who are only for a small segment of the city is a shame. These have been our streets, now these are about to be our seats," O'Rourke said.

Republican candidate William Heeney welcomes the challenge but thinks Republicans are in a strong position.

"With some of the things the Democrat side's coming up with like sanctuary cities and safe injection sites, I think people are fed up with those kinds of things," Heeney said.

Republican candidate Matt Wolfe says he takes the challenge seriously but thinks his new opponents are at a disadvantage.

"We have a ward organization of varying effectiveness but in some areas of the city it's very effective. We've also generally had a head start in raising money, in putting together the campaign infrastructure that you need to do this," Wolfe said.