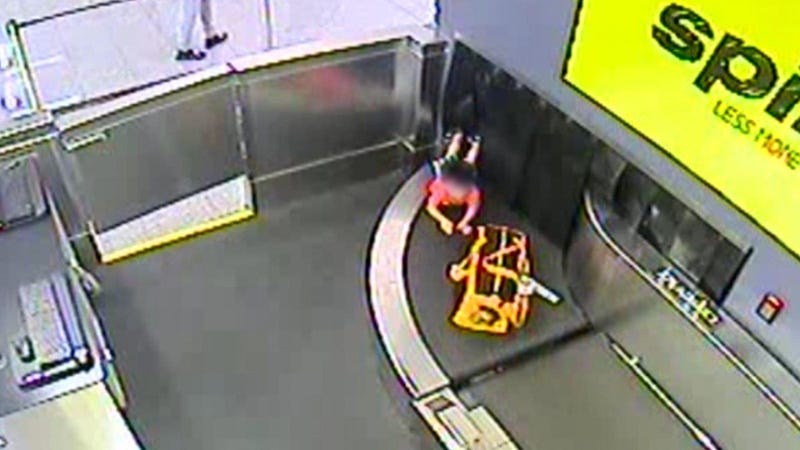 By Madeline Holcombe
(CNN) — A toddler was injured after he climbed onto a baggage conveyor belt behind a ticket counter at Atlanta's Hartsfield-Jackson airport and rode it all the way to the TSA bag room, authorities said.

Edith Vega said she put her son down to print her boarding pass at the Spirit Airlines kiosk on Monday, according to an incident report from the Atlanta Police Department. When she looked away briefly, he disappeared, she told authorities.

The boy had climbed onto the conveyor belt and was taken back to the TSA bag room, where agents saw him and stopped the belt.

Vega said she was told her son was on the belt for about five minutes.

"He just went a long ride away, I couldn't even catch up," Vega told CNN affiliate WSB. "I wanted to jump in and try to go get him, but they didn't allow me."

A toddler was "hurt pretty bad" after he climbed onto a baggage conveyor belt at Atlanta's Hartsfield-Jackson airport and rode it all the way to the TSA bag room, authorities said https://t.co/UHmDRqi1zt pic.twitter.com/SsVuju740X

According to the incident report, the toddler had a severely swollen and bruised right hand. The fire department responded to the scene and transported him to the hospital.

"Spirit Airlines is aware of an incident at Hartsfield-Jackson International in which an unattended child passed by a section of our ticket counter that was not staffed or open at the time," the airline said in a statement. "The child was able to access a back baggage area via a bag belt and sustained some injuries. We are currently working with TSA and airport officials to ensure all protocol was followed. We wish the child the best in their recovery."