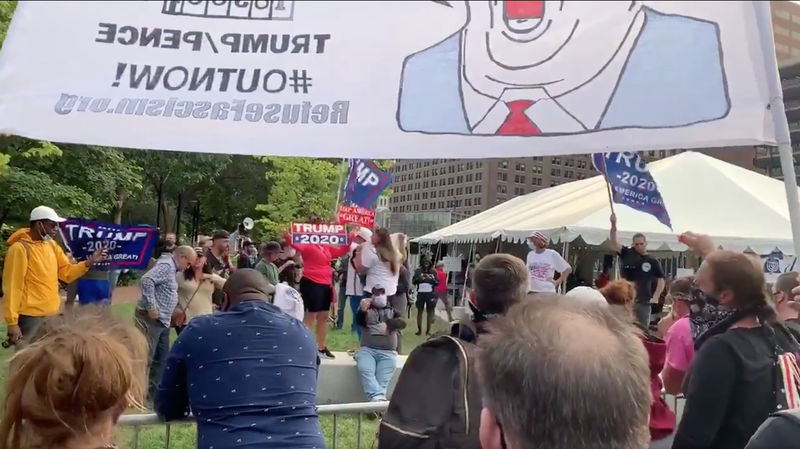 Expert: 250,000 Americans Could Die Of COVID-19 By Election Day
PHILADELPHIA (KYW Newsrdaio) — Voters put President Donald Trump in the hot seat Tuesday evening at a town hall-style forum at the National Constitution Center, and he defended his response to the coronavirus pandemic.

As protesters and supporters shouted outside, the president participated in the 90-minute ABC News broadcast, moderated by George Stephanopoulos.

Uncommitted voters peppered the president with questions, many on the pandemic and his administration’s response.

“If you believe it’s the president’s responsibility to protect America, why would you downplay a pandemic that is known to disproportionately harm low-income families and minority communities?” asked voter Ajani Powell, referring to the president’s recently released recorded comments from interviews with journalist Bob Woodward.

“I didn’t downplay it. I actually — in many ways, I up-played it, in terms of action. My action was very strong,” the president responded.

Powell tried to interject. “You did not admit to it yourself, saying that you—”

But the president continued.

He was referring to the travel bans put in place when the pandemic hit the U.S.

“I thought you were doing a good job with the pandemic response until about May 1. Then you took your foot off the gas petal. Why did you throw vulnerable people like me under the bus?” asked another voter.

“Well, we really didn’t, Paul,” the president responded. “We’ve worked very hard on the pandemic. We worked very hard. It came off from China. They should have never let it happen. And if you look at what we’ve done with ventilators, and now, frankly, with vaccines, we’re very close to having a vaccine.”

And he repeated a line he often uses, that the virus would disappear — even without a vaccine — "over a period of time."

He was asked by one voter why he didn’t support a mask mandate and why he doesn’t wear one more often. He replied that he wears one “when I have to” and he blamed Democrats for the lack of a mandate, which he does not support to begin with.

So far, there have been 196,000 deaths in the U.S. from the virus, according to Johns Hopkins University — which is 20% of the COVID-19 deaths in the world. The U.S. comprised only 4% of the global population.

The president actually said he knew six people who died from the virus.

“I learned that life is very fragile. I knew people. They were powerful people, strong people, good people - and they got knocked out by this,” he said.

Trump also answered questions about racial injustice, his push for law and order, the need to weed out “bad apples” among police, and the economy.

He denied reporters that he called U.S. troops who have died "suckers" and "losers."

And Trump was very critical of Democratic-run big cities, tying them to Joe Biden.

The former vice president will have a televised town hall of his own. It will be broadcast on CNN and will take place in his hometown of Scranton on Thursday.

Outside, it was all hands on deck, as protesters and Trump supporters converged on Independence Mall.

With their signs and swag, a few people protesting President Trump’s visit quietly sat in front of the NCC along Arch Street.

"He seems not to care about people of color in this country or immigrants," said Andrew, a protester from Old City.

"The mishandling of a pandemic, which has killed over 200,000 people," said Jessica, a protester from South Philly.

Police officers, some of whom were called in on their days off, were assigned to block city streets around Old City, and to keep the two sides from clashing - which Mayor Jim Kenney says the city will pay for.

"It costs us a lot of money, and we are not reimbursed for it," Kenney said.

In total, Trump was in Philly for about 2 1/2 hours, and the protests remained peaceful.