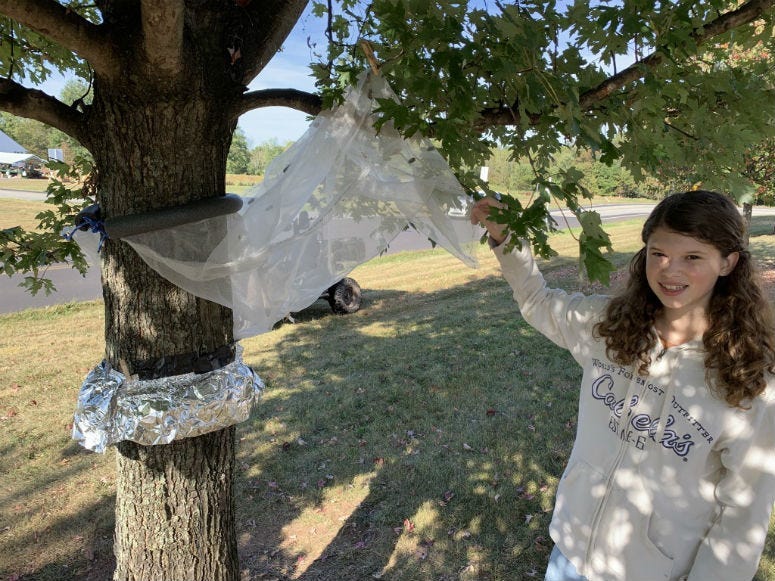 300 middle school students from across the country were recognized by Broadcom MASTERS, and 30 of them were invited to Washington, D.C. for the finals.

Alaina Gassler from Avon Grove, Chester County, won the top prize, $25,000 for using webcams and a projector to get rid of blind spots in her parents’ car. She said going in, she thought she had a chance to win an award.  “But I kind of lost hope when they got to the top five awards,” she shared.

When they called her name, Gassler says she couldn’t stop shaking. “And I almost tripped over everything I encountered on my way to the stage,” she said.

Rachel Bergey from Harleysville won the $10,000 Lemelson award for her design of a spotted lanternfly trap. She said it was extra special since the award was named for prolific inventor Jerry Lemelson.

“So when I heard my name I was just so excited,” Bergey said. “I was like ‘I can’t believe this is happening.’ But yeah, it was so fun.”

Gassler and Bergey both won awards at Drexel’s Del Val science fair, but Gassler said it wasn’t until they got to Washington, D.C. that they became pretty close friends.

“We have had so much fun asking people living in other places why they don’t know what a Wawa is and stuff,” she joked.

Bergey also said she felt she made life-long friends.

“We’re so similar and we get along so well,” she said. “And when I met them I was like, you know, these people actually feel like family.”

Gassler said she was interested in a career in physical therapy but last week had her also thinking more about engineering and possibly combining the two. “I’m more confident,” she said.

Bergey said she was still trying to decide if she wanted to design a lanternfly trap that can be marketed, or if she wanted to make a video showing people how to make their own. “I really want to help people save their trees,” said Bergey of her ultimate goal.