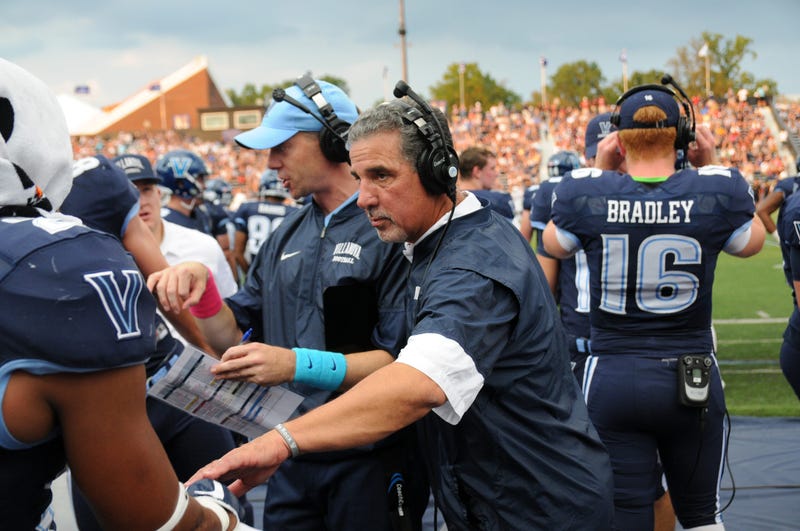 PHILADELPHIA (KYW Newsradio) — The Villanova Wildcats have been very impressive through the first month of the season, and they will look to continue their strong play on Saturday when they welcome Maine to the Main Line.

Villanova, now ranked as high as 8th in the country in FCS, improved to 4-0 this past weekend (1-0) in the CAA with a wild 52-45 overtime win at No. 10 Towson. The game featured six ties and four lead changes. Villanova needed a 45-yard field goal from Drew Kresge with 10 seconds remaining in the fourth quarter to send the game to overtime. Then in the overtime, quarterback Daniel Smith scored on a touchdown run and then the Wildcat defense stopped the Towson offense on the seven-yard line to seal the win.

"The thing that we probably took away that was the most exciting from our perspective is our team really handled the adversity that they were facing throughout the course of that game very well," Villanova head coach Mark Ferrante told KYW Newsradio. "When we were ahead we didn't get too crazy and too high and when we were fighting from behind we didn't get too low."

Villanova got four touchdown passes and two touchdown runs from Smith in the win as he continued his outstanding play. The transfer from Campbell has now thrown for 13 touchdowns this season with just three interceptions and rushed for four additional scores through four games.

Maine will come into Villanova Stadium with a record of 2-2 (0-1 CAA). The Black Bears are coming off a win last weekend as they went into Hamilton, New York, and beat Colgate, 35-21.

"They've got a lot of guys back on both sides of the ball," Ferrante said. "They won the league last year, played very good defense. (Junior Chris) Ferguson, their quarterback (a La Salle College High School alum) is distributing the ball really well. Their running game is starting to go a little bit more as of late that we've seen on film. (Senior) Earnest Edwards is an explosive receiver and an explosive returner. He had two kickoff returns (for touchdowns) last week in their victory over Colgate (also had a touchdown catch)."

Last year, these two teams met up in Orono, with Maine winning 13-10 on a 52-yard field goal as time expired.

Saturday's game at Villanova Stadium gets underway at 3:30 p.m.