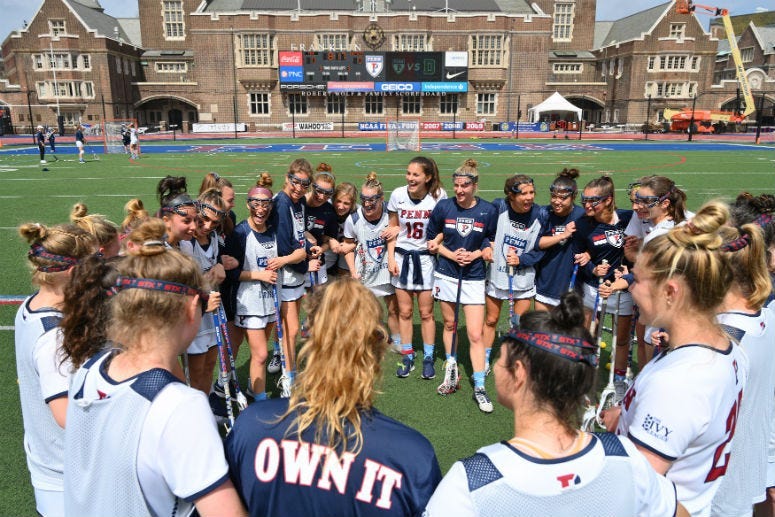 PHILADELPHIA (KYW Newsradio) — The University of Pennsylvania women's lacrosse team finds itself in a familiar situation this week - getting ready for the NCAA Tournament.

For the 13th straight season the Quakers are in the field and they will open things up on Friday, taking on Georgetown University in the first round up in Syracuse University.

"It's what you want to play for when you're a college athlete, to go to the NCAA Tournament," Penn head coach Karin Corbett told KYW Newsradio. "So we're really, really excited."

Penn is 12-5 on the season. The Quakers advanced to the Ivy League title game where they lost to Princeton University. Corbett talks about what has allowed her team to once again get into the tourney field.

"I think when we are playing well, our attack is on the same page and we have a lot of different kids that can put the ball in the net," she said. "I think that's when we do our best. When we kind of share the goals and the opportunities, I think that we're a tough team to beat. I think our defense, we've been able to put a lot of different defenses in and our kids have embraced that. Sometimes that's difficult for some teams to have to change up their game plan on their attacking end."

The Quakers have three players that have scored at least 35 goals this season. Sophomore attacker Zoe Belodeau leads the way with 39, junior Erin Barry (recently named Ivy League Midfielder of the Year) and junior attacker Gabby Rosenzweig each have 35. Rosenzweig paces the team with 57 assists, which is also good for fourth in the nation.

Penn actually played Georgetown during the regular season, beating the Hoyas 8-7 at Franklin Field back on March 9.

"I think both of us were very different teams than we are now," Corbett said. "So I think it will be a different game all together."

The winner on Friday plays Syracuse in the second round on Sunday.

The Quakers and Hoyas will get underway Friday at 4:00 p.m.