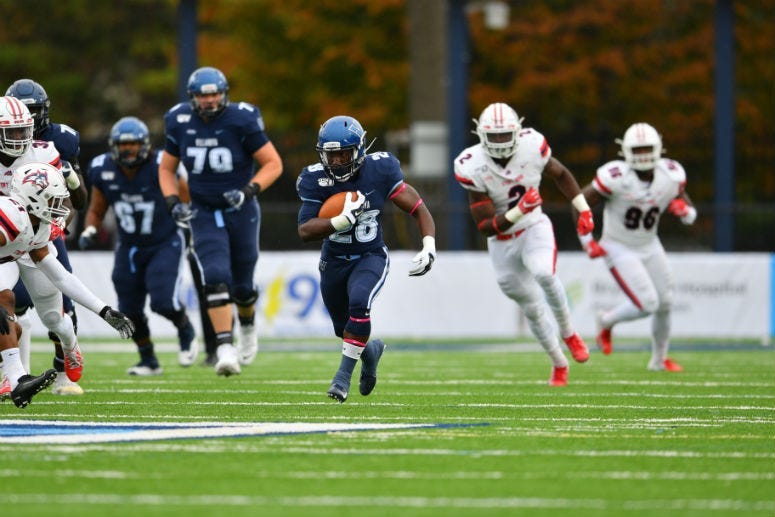 PHILADELPHIA (KYW Newsradio) — It's a short week for the Villanova Wildcats as they get ready to play a non-conference game on Friday night, welcoming Long Island University to the Main Line.

Villanova improved to 7-3 (4-3 Colonial Athletic Association) this past Saturday with a 35-28 home win over Richmond. The Wildcats trailed in that game at the half 28-21, but they held the Spiders off the scoreboard over the final 30 minutes and scored a pair of fourth quarter touchdowns to grab the win and snap a three-game losing streak.

"Our guys came out, there was no panic in the locker room, there was no anything at halftime," Villanova head coach Mark Ferrante told KYW Newsradio. "The guys really came out and just stuck with what the plan was and really came out and just executed better across the board in most phases of the game, if not all phases of the game, in the second half. We were able to put the points on the board that we needed and keep them out of the end zone in the second half, so we were able to come away with that victory."

Villanova rushed for 242 yards and four touchdowns in the win over Richmond. Freshman DeeWil Barlee led the way with 114 yards and a score on 18 carries.

"DeeWil and TD Ayo-Durojaiye (41 yards and a touchdown against Richmond), the two freshman running backs, have done a real nice job filling in for the loss of (injured running back Justin) Covington. And then in the last few weeks, (sophomore running back) Jalen Jackson's been out as well," Ferrante said. "So we had a nice stable of running backs, with all four of them for the beginning part of the season. But then, with Jalen and Cov going out, the two freshmen were forced into probably bigger roles than they anticipated that they would have to fill going into this season. But they've both done a phenomenal job."

Long Island University is in its first season as an FCS program and calls the Northeast Conference home. The Sharks are 0-8 (0-7 NEC).

"It's kind of hard to watch the film. and then when you see their overall record, it doesn't really go hand-in-hand," Ferrante said. "They've had some close games. They've done some good things."

Friday night's game gets underway at 7 p.m. at Villanova Stadium.