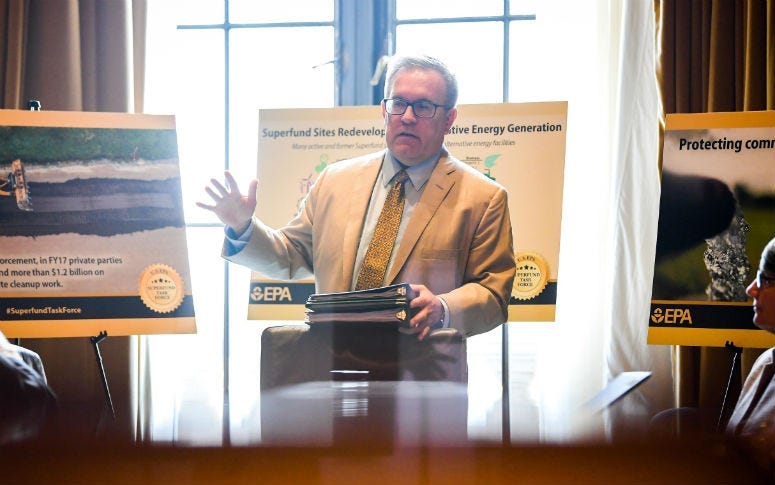 PHILADELPHIA (KYW Newsradio) — The acting administrator of the Environmental Protection Agency may be approved by the Senate soon and take over the agency. But nominee Andrew Wheeler is not winning any favor among local Congress members.

In December, Andrew Wheeler signed off on a plan that would not regulate PFAS or PFOAs, cancer causing chemicals that were used in firefighting foam at military bases. Those chemicals caused water contamination at military bases nationwide, including those at Horsham and Warminster.

"Many residents in suburban Philadelphia drank water with high levels of PFOAs and PFAS for years, possibly decades, before realizing that water was contaminated. That is a vital issue that absolutely needs to be addressed by the federal government," said Democratic Congressman Brendan Boyle, who represents part of that area.

Since December, Boyle, along with Republican Congressman Brian Fitzpatrick and Democratic Congresswoman Madeline Dean, have formed a bipartisan committee on the chemicals.

Fitzpatrick says pressure on Wheeler may have changed the nominee's position on the chemical limits in water. It is now voluntary, not mandatory.

"He may in fact be supportive of reclassifying it from an emerging contaminant to a hazardous substance, which is very, very important. But the second piece of that is that he be willing to establish MCLs,  maximum contaminant levels," Fitzpatrick said.

Fitzpatrick says that with MCLs going from advisory to compulsory, that will allow liability to kick in.

He believes the chemical makers, which have profited all along, should be held responsible.

"These residents did nothing wrong. This problem was caused by no fault of their own. There were military installations who were using firefighting foams that they shouldn't have been, and ultimately, I believe that the manufacturers of these chemicals who profited to a great extent, for decades upon decades, ultimately should bear the financial burden," Fitzpatrick added.