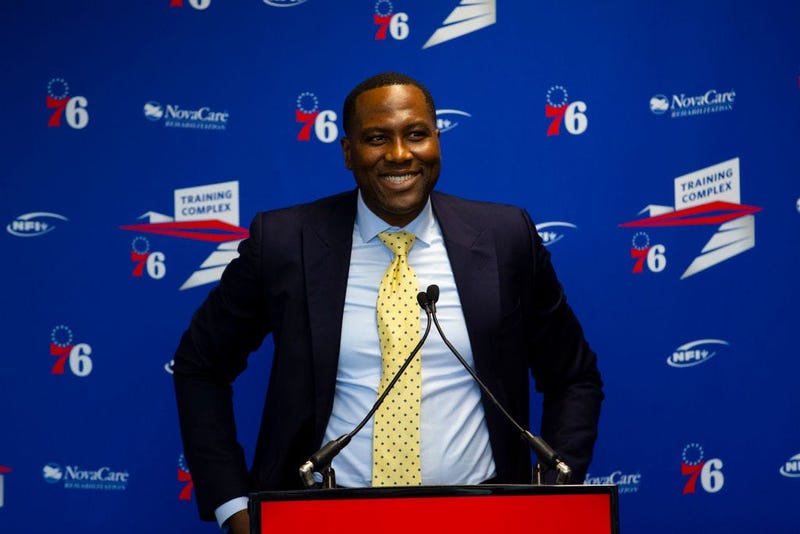 “As of now, yes — it’s failing,” Brand said. “It didn’t produce the results that we expected. It’s a results-based business, and we’re trying to right those wrongs and make sure we do better."

Brand said his decision to fire head coach Brett Brown after seven seasons was difficult. Brown is somebody Brand said he respects personally and professionally. Brand briefly played for Brown at the end of his career, and they’ve always spoken extremely highly about one another since Brand took over as GM prior to the 2018-19 season.

Brand believed a change needed to be made.

“We underperformed. Felt it was time for a new voice, new perspective,” Brand said.

He will also be responsible for the search for Brown’s replacement. He plans on it being thorough with all options on the table.

“To be clear and frank, we feel that the collaboration days didn’t work too well, so I will be leading this search,” he said.

Brand elaborated on why he’s ready to anchor this very important hiring.

“I’ve grown as a leader,” he said. “I’ve grown as a general manager. I was put in the fire. I had so many great, tough decisions to be a part of. But now I’m looking forward to putting my stamp on this thing and take full accountability for whatever happens next.”

Brand didn’t have a timeline for hiring the new coach. He admitted it would help if that person were hired before the NBA Draft and free agency period, but he insisted he’s not going to rush this process.

What type of replacement is he looking for?

“For the new coach, just someone that’s gonna lead this team to the next level. All options are on the table. We’re gonna figure out their temperament, how they plan to use Joel (Embiid) and Ben (Simmons), their philosophies.”

Speaking of Embiid and accountability, the latter has been a theme surrounding this team since Josh Richardson spoke critically about that important facet following Sunday’s loss to Boston.

#Sixers guard Josh Richardson was asked for his impressions on Brett Brown.Richardson complimented Brown, but then questioned accountability. It's not the first time Richardson did that this season. pic.twitter.com/e34gGTz44o

It’s not uncommon for some to question Embiid’s accountability, but Brand defended his All-Star’s motor, mindset and drive. He also emphasized that Embiid and Simmons are franchise players who he wants to keep with the organization.

“I’m not looking to trade Ben or Joel,” he said, when asked if the possibility arose to move them. “I’m looking to compliment them better. They’re 24 and 26 years old, respectively. You try to make that fit as long as you can. They wanna be here. They wanna be with our organization, and I see them here for a long, long time.”

Brand still plans on evaluating the roster, as well as the front office, which includes holdovers from Bryan Colangelo’s regime, which preceded Brand with Brown jammed in between on a brief interim basis.

“A lot of people know we’re strong in a strategic and analytic standpoint. Get some more basketball minds in here, but all options are open.”

To sum things up — it should be a very interesting off-season for the Sixers. The 2019-20 season was beyond disappointing basketball-wise, but the end result could lead to more changes in the spotlight and behind the scenes.