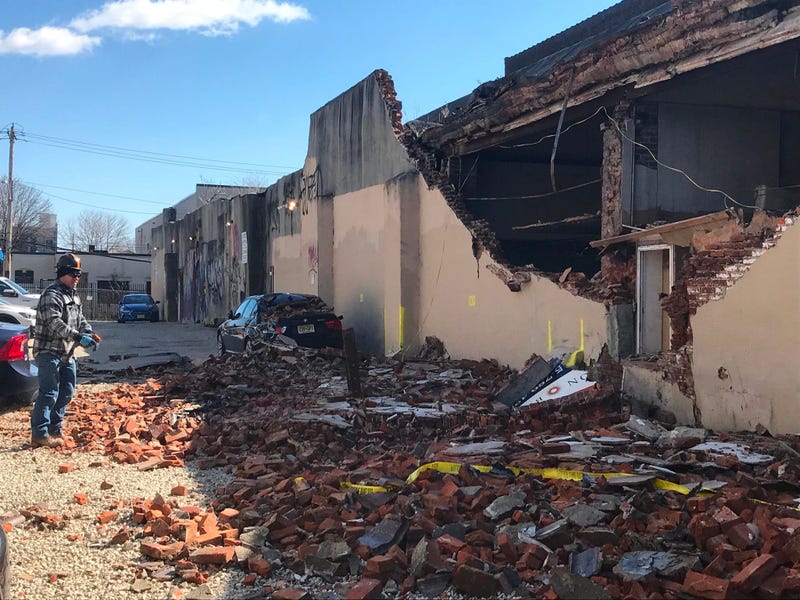 PHILADELPHIA (KYW Newsradio) — Officials say the wind is to blame for a partial building collapse at Fifth and Master streets in Kensington — as well as the aging building itself.

Part of the roof and a wall are missing from the old garage and vacant building. For Chris Gillespie, it was quite the site to see when he stepped outside Monday morning.

"I was thinking, it's about time for that wall. It seems like it had been leaning for a long time," he noted. "I probably should have called L&I earlier, so I feel like kind of a rube."

Officials say the wind is to blame, for a partial building collapse at 5th and Master streets in Kensington. A crushed BMW is part of the collateral damage @KYWNewsradio pic.twitter.com/Ii2VRXiO4A

The bricks from the collapse crushed a BMW that was parked in the lot next to the building.

RELATED: High winds cause outages for tens of thousands in region

"There will be violations issued on this property and certainly the owners will be billed for the cost of any cleanup and any additional demolition work that has to be done," Guss said.

Guss says they've seen a number of older structures fall victim to the high winds, but new sites are at risk too.

"We've also been urging construction sites to batten down the hatches, make sure everything is secure," Guss added.

The space is owned by a local company, according to Gillespie, and is used as a parking lot.

If anything, he thinks the collapse will be used to speed up development in the area.