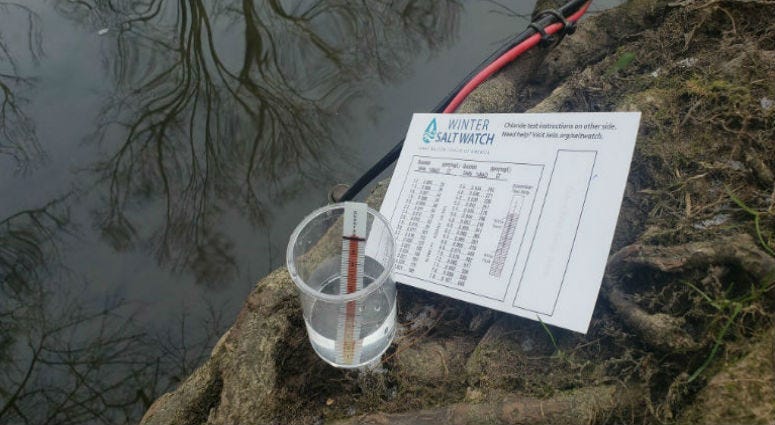 PHILADELPHIA (KYW Newsradio) -- A group of "citizen scientists" helped measure the salt content of streams and creeks during the past winter in our area. And, their findings on the actual source may surprise you.

Kevin Roth, of the Pennypack Ecological Restoration Trust, was one of the coordinators of the Winter Salt Watch project.

It kept tabs on how salt runoff from roads, streets, pavements and parking lots affects the water running through our woodlands and into our rivers.

Dozens of volunteer collectors found high levels of salt in several fresh water creeks and streams that flow into the Schuylkill River and Delaware River.

Roth says the source of salt affecting parts of the Pennypack Creek after one big storm surprised the group.

The majority of it wasn't spread by road crews.

"Most of it comes from tributaries that lead up to residential areas and areas that have a lot of strip malls and local businesses," Roth said.

He says there are steps you can take to reduce the salt runoff, which can end up in the region's drinking water supply as well.

"Shoveling the snow and ice before you salt," Roth explained. "So shoveling right after it snows will reduce the amount of salt your need altogether. We also tell people to reduce it and reuse it," he said. "Use just enough to melt the ice and then after it melts, sweep it and reuse the salt."

Emily Bialowas, of the Izaak Walton League, which supplied the kits to do the measurements, says the data collected showed some harmful levels of salt contamination.

"That salt is impacting aquatic life, living in the water," she said. "There are fresh water species living in the stream, they're not adapted to deal with salt in their water. The same for any woodland creatures drinking from that water."

Volunteers will resume the Winter Salt Watch in November and continue monitoring conditions through April 2020.