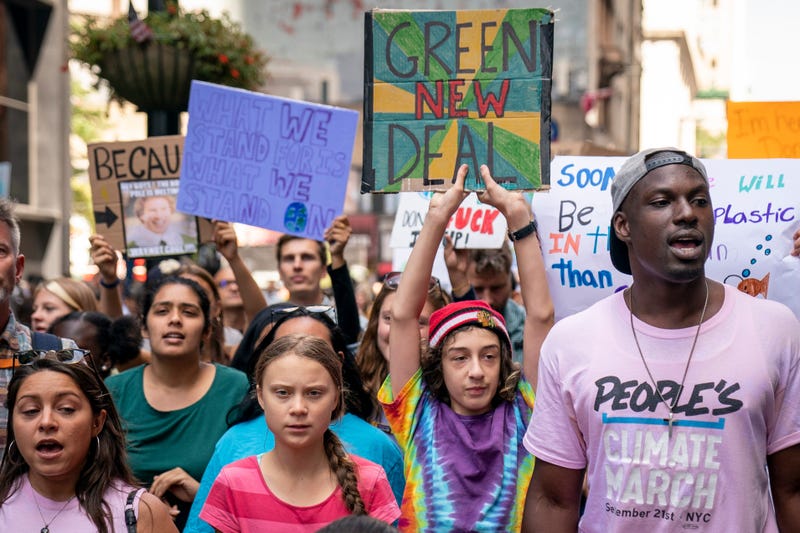 PHILADELPHIA (KYW Newsradio) — It’s hard to find anyone without an opinion on climate change or its most famous teenage Cassandra, 16-year-old Greta Thunberg, crowned Time magazine's youngest-ever "Person of the Year."

According to the teenage activists she has inspired in the Philadelphia region, she's the A-word. Italics. Capital letters. Repeatedly.

"She's an amazing figurehead for this movement," said Pennsylvania Youth Climate Strike finance committee head and Cheltenham High School senior Atara Saunders, 17. "I actually had the amazing opportunity to strike with her in August when she first arrived in New York City.

"She's an amazing figurehead because she doesn't want the attention on herself. She always directs attention to others who are active in the movement. Like, when I went to that strike, I didn't even realize that she was there at first because she was keeping to herself and being quiet, because she realizes she has the power to empower other peoples' voices. And it's just incredibly important and amazing that she does so."

"I think she's amazing," added Abby Tabas, 18, who works with Cheltenham High School's Environmental Club and Political Education and Action Club. "Greta's definitely inspired me to get more active, and I think that just the issue of climate change really affects my generation's ability to survive and flourish, so I think that it's really important for people like me and like Greta to get involved."

"I find it to be a real shame that some people do not realize there is no 'Planet B' that we can simply resort to when we can no longer use the one we have," said Burlington Township High School sophomore Lauren Benkin, 14. "I strive to educate my peers and younger people about our changing climate, polluted planet, and depleting ozone layer ... to share with them how they can make a change and help work towards a healthier, better planet we live on. Every change people make is a small difference. If more and more small differences are made, a chain reaction will occur, causing a much larger impact on the world."

Cassidy Foster, 12, attends Abington Junior High School and hasn’t skipped class to protest yet, but she is already preparing for future activism on behalf of the planet as a volunteer at Briar Bush Nature Center nearby.

"My concern with climate change is the animals," Foster explained. "The animals that live in the snow — not just the North and South Poles where they live, they also live on the snowy peaks of mountains, like the snow leopard and the chinchilla. And climate change melts the snow and pushes them up the mountain, and where they live just decreases until eventually they have to move, adapt or die. That's the acronym, MAD, for move, adapt or die. And humans are part of the animal world, so the California wildfires that were helped by climate change had the same kind of effect."

As for those Greta-inspired protests — it's so much more than megaphones and marching. Atara Saunders explained that the strikes in Philadelphia are promoting three specific actions that the protesters would like to see from City Council.

"First is an end to the 10-year property tax abatement in order to make our schools not toxic anymore," she said. "The tax abatement is really only helping wealthy real estate owners. The money from those taxes could be used to help clean up our schools, which are currently riddled with asbestos and lead.

"No. 2: No new fossil fuel infrastructure. How can Philadelphia call itself a green city when they're signing 20-year pledges with fossil fuel companies? ... It's just completely unfair and inhumane. So this ban would help us become a renewable city.

"And third, ban hydroflouric acid. It's present at refineries causing a ton of pollution that's completely unnecessary and it's really endangering residents, especially in South Philly."

Do our own environmentally aware teenagers inspire you? Saunders welcomes activists of all ages, from babies to the elderly, to join the Youth Climate Strikes with foot power or even monetary support.

If you'd like to learn more about raising a Greta/Atara or simply more about the parental perspective on climate change, Moms Clean Air Force and Climate Dads would welcome your interest too.

In the meantime, as you start filling in that new calendar for 2020 — the next Global Climate Strike is scheduled for April 22.