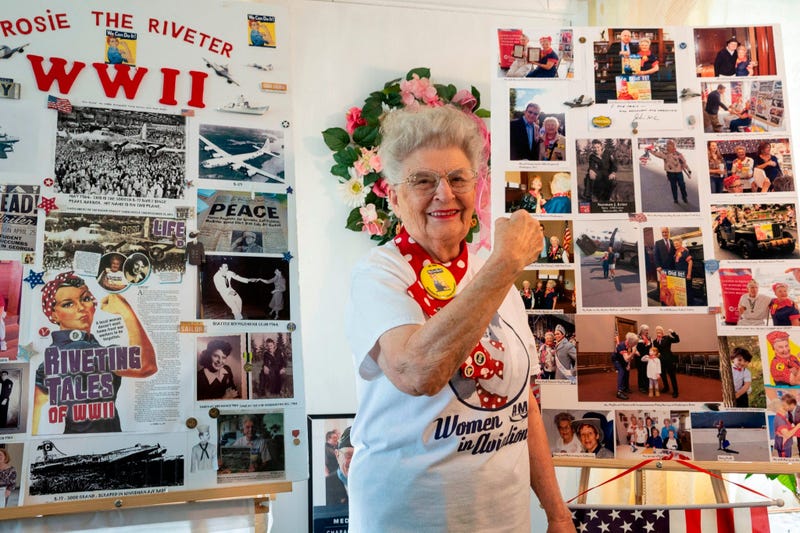 PHILADELPHIA (KYW Newsradio) — While American men were off fighting World War II overseas, women here on the homefront stepped up to the plate to do whatever was needed.

"When war was declared, my sister and I had been to a matinee. It was Sunday, and we came home and our parents were sitting by the radio, very upset. They said Japan had bombed Pearl Harbor."

Krier was 15, living on her family farm in North Dakota.

"Our boys just left in droves and, you know, it just took the heart out of the small towns," she said.

And out of the factories.

With the men going off to war, women and girls were recruited to fill their vacant jobs in the defense industry. Many of them, like Krier, built planes.

"I worked on a B-17, which I loved to work on. I worked on the wing and in the nacelle. That's where the engine goes," she said. "I was less than 100 pounds at that point. Now, the wings have ribs inside. As a bucker, you had to weave in and out of those wings. And the riveters on the outside, now, and you had to buck that rivet. In other words, she's shooting that rivet in, and you have to have the bucking bar behind it to seal it. Better not be claustrophobic, because you're stuck in there!"

"Rosie" became one of the government's most successful propaganda recruitment tools.

"They were taking women right off the street," Krier said.

The first Rosie poster was created by a Pittsburgh artist in 1942 — a determined-looking brunette with a red polka-dotted bandana tied around her head, in blue coveralls, showing off her flexed biceps with a speech bubble that read: "We can do it!"

"We were there to win the war. The men needed the equipment and that's what we did. We built everything they needed," Krier said.

"One of the stories I love to tell is about Hitler. He said that he wouldn't have any trouble defeating North America, because he said American women couldn't produce. He said we were soft and spoiled and spent too much time on cosmetics, stockings, you know, frivolous things. We showed Hitler what American women were made of."

Then, the war ended, and the men came home.

"It was so sad, because our men came home to parades and flying flags, and Rosie came home with the pink slip. It just wasn't fair at all," she said. "They never recognized Rosies."

And the Rosies are still fighting for recognition today.

"That's my story as Rosie the Riveter," Krier said. "And I still want it to go on and on. I want it to go down in history. That's what I want, you know, kids realize what we did."
<div class="co