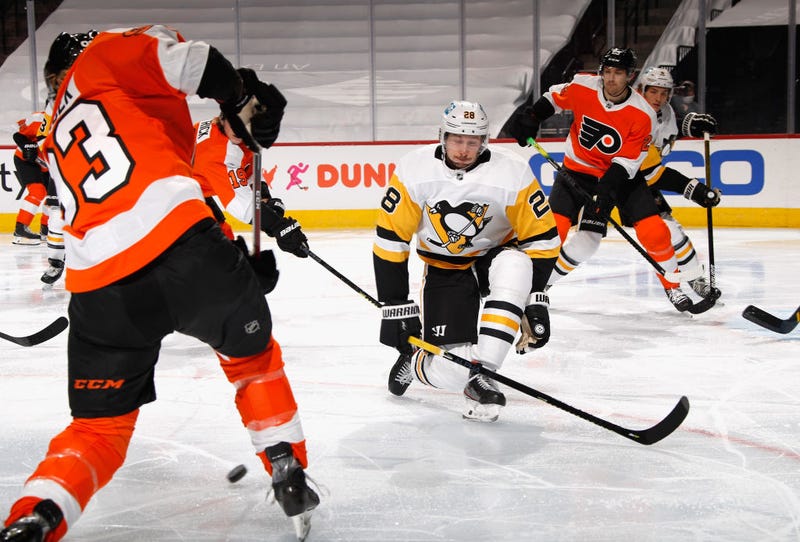 PHILADELPHIA (KYW Newsradio) — It was an impressive opening night for the Flyers.

In a year with a shortened season and no preseason games, the Flyers opened up their 2021 campaign with a 6-3 win over Pittsburgh.

The two teams were tied in the third period before three straight goals by the Flyers broke the game open.

For a season opener in a year without tune up games, head coach Alain Vigneault was impressed with the pace of the contest.

"For both teams from ice level the speed and the intensity was real high," said Vigneault. "The execution and the decision making will get better as we play more games. There is no doubt that I liked the pace we played at.  I do think that we are going to need to be better and get better 5 on 5 in our game and I am very confident we are going to be able to do that." ​

Six different Flyers scored in the victory, while goalie Carter Hart came away with 31 saves.

Joel Farabee had a goal and three assists, and the second year forward believes this could be the start of a special season thanks to the Flyers' depth and added additions.

Travis Konecny added an assist during the Flyers' third period barrage.  Konecny said the Flyers were able to cash on their opportunities, and believes the goal outburst in the third period proved to be too much for the visitors.

"I think we capitalized on our chances," said Konecny. "I still think there is a little more for our group to give. We are going to get better and better outworking them and staying on teams.”

One of the third period goals was originally given to Konecny but was later changed to Oskar Lindblom. It was the first game in over a year for Lindblom, who overcame his battle with cancer.

Vigneault was thrilled to have Lindblom skate on home ice, and wished there would have been fans at the Center to give him a warm welcome.

"I thought of that going in," Vigneault said. "I talked to Oskar a little bit about it after the game. It would have been phenomenal to play this game, Oskar back with this place full of fans and the first time he stepped on the ice, he was the starting lineup, I’m sure he would have gotten the cheer that he deserves."