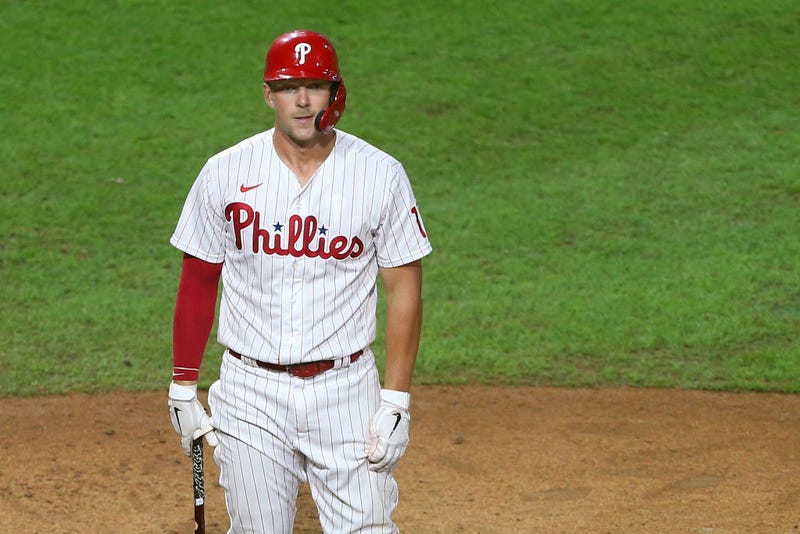 PHILADELPHIA (KYW Newsradio) — As the Phillies gathered for the first full squad workout of spring training, there was good news on the health of their first baseman.

Rhys Hoskins had surgery in the offseason on his left elbow, and there was speculation as to whether or not he would be ready for the start of the 2021 campaign.

Hoskins has been medically cleared and is on course to be ready for the opener on April 1. Hoskins was happy to be back in the batting cages on Monday and felt comfortable taking his first swings of spring training.

"I let it fly a little bit," said Hoskins. “Just kind of made sure that it’s still in there. It’s always nice to remind yourself, especially in batting practice, but that’s also part of making sure I’m getting the type of reps and the intensity in the reps that I need."

The Phillies fell just short of the postseason in 2020, and Girardi will need as many healthy players as he can get in 2021.

Girardi was impressed with what he saw from Hoskins as he looks to get back into form in Clearwater.

"Rhys looks great," said Girardi. "Where Rhys is at at this time, I am thrilled. He has done everything he really needs to do. We’ll continue to get him more reps so he’s comfortable."

Girardi is also hoping to get his team comfortable as they look to break their long playoff drought. The Phillies have not reached the postseason since 2011. Instead of goals such as numbers of home runs and RBIs, Girardi's message to his players was to focus on improvement every time they take the field.

Few are giving the Phillies much of a chance to be a serious contender this year.  The National League appears to be much stronger on paper and the Phillies' late season collapse last fall offered little encouragement.

However, Hoskins and his teammates are setting the bar high even as they follow Girardi's blueprint.

"We're trying to get into October and reach the World Series," Hoskins said. "I think that's every team's goal at the beginning of spring. I think if we get caught up getting too far ahead, setting goals as a team too far ahead, we may overlook some of the work that needs to be done."