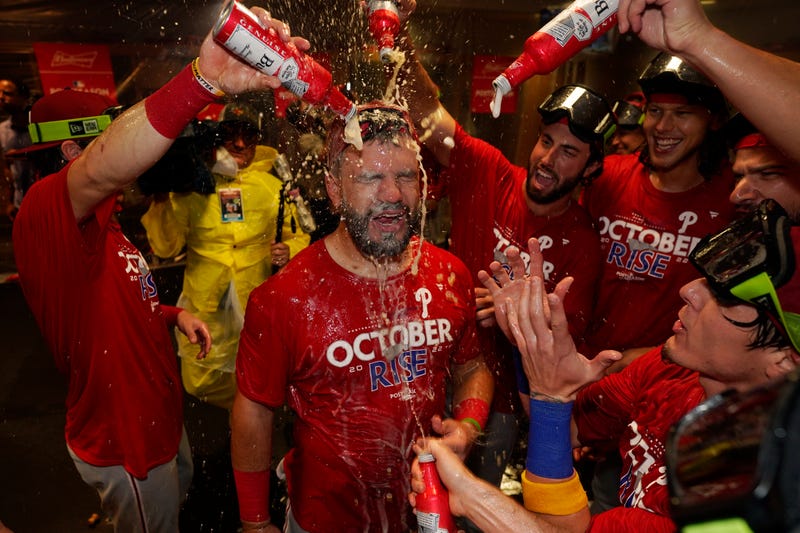 HOUSTON (AP) — When the Philadelphia Phillies fired manager Joe Girardi after a 22-29 start to the season, it was hard to imagine that Bryce Harper, Kyle Schwarber and interim manager Rob Thomson would be dancing in a champagne shower come October.

But this team persevered through the tough start and an injury that took Harper out for two months to do just that, beating the Houston Astros 3-0 Monday night to clinch its first playoff berth in 11 years.

“This is the goal,” Harper said. “This is what you play for.”

Aaron Nola took a perfect game into the seventh inning and Schwarber homered to propel the Phillies to the victory Monday.

“It hasn’t been an easy season,” Schwarber said. “We went through a manager change, went through the MVP being down... and we went through people saying that our season’s over, that don’t even count the Phillies and they can’t catch the baseball... and for us to get all of our guys back and healthy and for them to all be there and contribute that’s what it’s about.”

After Brandon Marsh caught Mauricio Dubon's fly ball in center for for the game's final out, players jumped and cheered in jubilation before meeting at the mound where they hugged and bounced around some more.

The video board at Minute Maid Park displayed the team's logo and the words: “Congratulations Philadelphia” as the Phillies celebrated.

A small but vocal group of Philadelphia fans congregated near the team's dugout and chanted: “Let's go Phillies," in the bottom of the ninth inning.

In the clubhouse after the game, players and coaches drank directly from bottles of champagne affixed with special labels celebrating them punching their long-awaited and hard-fought ticket to the postseason.

When a team consistently makes it to the postseason year after year, the playoff-clinching shindig is a rather modest one — been there, done that. While it’s not the end goal for the Phils, they couldn’t contain their jubilation for a franchise that had the longest postseason drought in the National League.

They danced and sang as champagne from those special bottles rained down and soaked their red playoff T-shirts.

WE’RE GOING TO THE POSTSEASON. pic.twitter.com/c8TJIFZSgT

WE ARE STOKED BABY. pic.twitter.com/UF0mX7MYg2

Harper credited Thomson as the key to the team turning things around. Thomson said he appreciated the compliment but wouldn't take credit for the success.

“At the start of the year we just weren’t playing well and we weren’t playing to our capability,” he said. “But I always felt like we were going to get there and we did. So. I just happened to come in at the right time.”

He added, “We’re not done. After Wednesday, we got 13 more wins and then we’re world champions.”

THE CLUBHOUSE CANNOT BE TAMED. pic.twitter.com/3zyjKMTAUw

Team CEO John Middleton became emotional addressing the players, encouraging them to enjoy this moment, as it “doesn’t come around all the time. I want to get used to this like we were in ’07 through ’11, but enjoy it.”

That’s when the Phillies reeled off five consecutive National League East titles, the second one leading to the franchise’s second world championship.

This is the Phillies' first wild card berth, forging a tougher path to the trophy everyone wants. They’ll need to win a quick best-of-three series on the road in either St. Louis, Atlanta, or at the Mets before advancing to the NLDS. For as joyous as Monday was, it could be over by this weekend.

In all likelihood, they’ll be underdogs, but with starting pitchers Zack Wheeler and Nola probably going in Games 1 and 2, they have a chance. Middleton preached not backing down to the best.

“You look at the playoffs and you look at our season record against them, we’ve beaten a lot of them,” Middleton said. “There’s no reason why we can’t just keep on going from here, guys. So relax, believe in yourselves, believe in each other, and play fearlessly.”

"There's no reason why we can't just keep on going from here, guys." pic.twitter.com/OPxBRNLfxl

The Phillies clinched at the same ballpark where they secured their last postseason trip on Sept. 14, 2011. That game was a 1-0 victory over the Astros highlighted by a complete game shutout by Hall of Famer Roy Halladay.

Philadelphia’s postseason drought was the longest active one in the majors after the Seattle Mariners clinched their first playoff berth in 21 years Friday night.

Now that the Phillies have clinched, all 12 playoff spots are set with the exact matchups to be determined in the next two days.

The Phillies entered the opener of the final regular season series of the year needing a win or a loss by the Brewers to get a National League wild card spot. The Brewers rallied to beat the Diamondbacks 6-5 in 10 innings a few minutes before Philadelphia wrapped up the victory.

Nola (11-13) struck out nine and didn’t allow a baserunner until Yordan Alvarez singled with two outs in the seventh. David Hensley followed with a single and Nola was replaced by Jose Alvarado, who struck out Kyle Tucker to end the inning.

Zach Eflin pitched a scoreless ninth to complete the shutout and get his first save in 11 years of pro ball.

Schwarber got things going for the Phillies in their first visit to Houston since Sept. 16, 2012, with a leadoff homer off Lance McCullers (4-2)

It is the eighth multi-home run game this season for Schwarber, who leads the NL with a career-high 46 home runs, and gives him 199 homers in his career.

McCullers allowed six hits and one run with five strikeouts in six innings.

“He was very good,” manager Dusty Baker said. “The first pitch, he missed location with it and that’s a dangerous guy to miss location with. And then he was really good, but Nola was better.”

He said before the game that he planned to get some of his starters out early to rest since Houston has already clinched the best record in the American League. 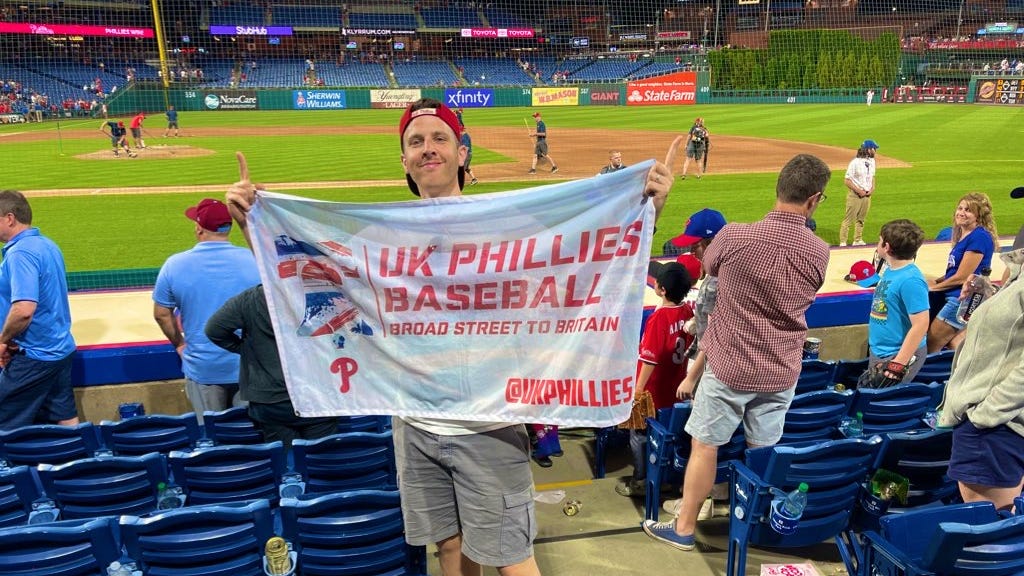 Loyal Phillies fan from UK longs for a Red October

The Phillies have three players who will appear in the postseason for the first time after playing more than 600 career games. Jean Segura leads the group with 1,327, J.T. Realmuto has 1,004 and Rhys Hoskins is at 666.

Segura, who is in his 11th major league season, began to wonder if this day would ever come.

“I was feeling some pressure on myself like I’m probably never going to get to the postseason,” he said.

Now that he's made it, he couldn't be happier.

“It was a long ride,” he said. “I’ve been waiting so many years for this opportunity and I guarantee I’m not going to let it go by.”