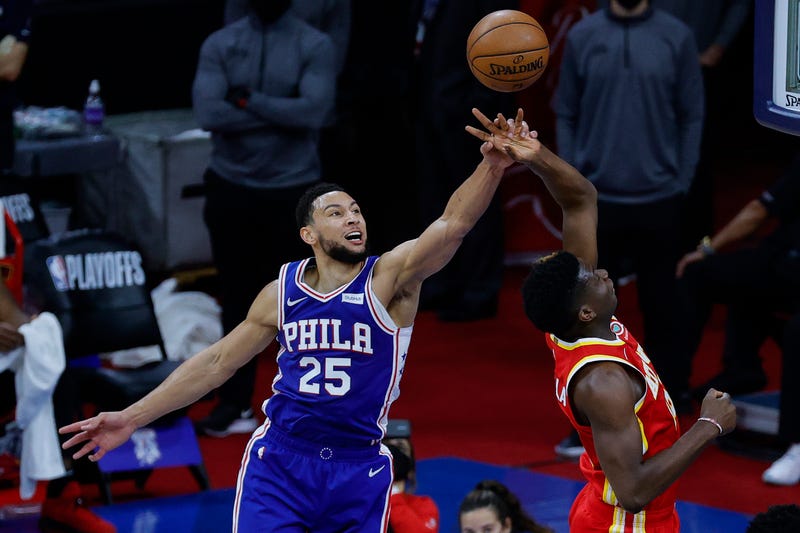 Ben Simmons, No. 25 of the Philadelphia 76ers, blocks Clint Capela, No. 15 of the Atlanta Hawks, during the second quarter during Game Two of the Eastern Conference second-round series at Wells Fargo Center on June 8, 2021, in Philadelphia, Pennsylvania. Photo credit Tim Nwachukwu/Getty Images
By Dave Uram, KYW Newsradio

He came in second to Utah Jazz center Rudy Gobert, who’s now a three-time winner of the award.

Of the global panel of 100 sportswriters and broadcasters, Gobert received 84 first-place votes, while Simmons only got 15.

During the regular season, Simmons said he believed he should be Defensive Player of the Year because of his versatility to guard every position. In fact, after Simmons put up an inordinate amount of points for himself in a game — 42 — at the Utah Jazz on Feb. 15, he said it was disrespectful having Gobert guard Simmons that night.

Ben Simmons scored 42 points when the #Sixers played at the #Jazz this season on February 15. https://t.co/3sVp2uFiNz

Although Simmons won’t be getting the individual award, that doesn’t change the critically important playoff run his team is in: a tough second-round series against the 5-seed Atlanta Hawks.

The perfect way for Simmons to prove those who voted for Gobert over him wrong is to shut down Hawks star Trae Young Friday night in Game 3 at Atlanta, with the series tied at one game apiece. ​