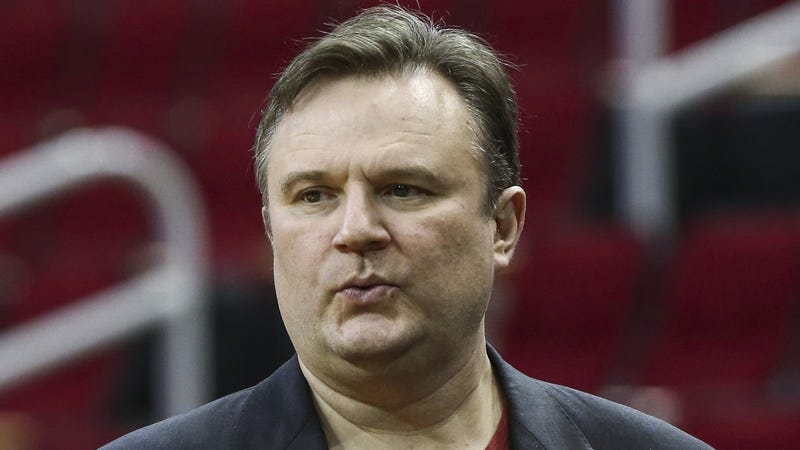 Daryl Morey looks on as Houston Rockets general manager in 2018 before a game between the Rockets and the San Antonio Spurs at Toyota Center. Photo credit Troy Taormina/USA TODAY Sports
By Dave Uram, KYW Newsradio 1060

PHILADELPHIA (KYW Newsradio) -- Following their disappointing first-round exit at the hands of a Boston Celtics sweep, the Sixers have made two significant moves in the offseason to turn their franchise back in the right direction.

The first was hiring Doc Rivers as head coach after General Manager Elton Brand fired Brett Brown. The latest is bringing in one of the most well-established front office executives in the NBA.

A source confirmed the reporting of ESPN’s Adrian Wojnarowski that the Sixers are in advanced talks with Daryl Morey to be the president of basketball operations, which ranks above Brand.

The deal with Morey is expected to be finalized as early as this weekend. It’s very obvious the 76ers acted quickly to scoop up Morey after he resigned as General Manager of the Houston Rockets, where he was very successful for many years, highlighted by two trips to the Western Conference Finals, and the acquisition of superstar James Harden.

According to Shams Charania of The Athletic, Morey is agreeing to a five-year contract.

Sources: Former Rockets GM Daryl Morey will sign a five-year deal with the Philadelphia 76ers as soon as this weekend to run the franchise’s basketball operations.

Some Sixers fans have always felt some sense of connection to Morey because he used to work with former Sixers General Manager Sam Hinkie in Houston.

In July, Morey joined The Rights To Ricky Sanchez Podcast, where he discussed a variety of topics including Hinkie, his philosophies on running team and Philadelphia fans — in relation to how Hinkie was viewed during his time with the Sixers.

Morey found himself in controversy last fall when he tweeted support for Hong Kong pro-democracy protests, which he ended up deleting. This led to issues for the NBA with China.

1/ I did not intend my tweet to cause any offense to Rockets fans and friends of mine in China. I was merely voicing one thought, based on one interpretation, of one complicated event. I have had a lot of opportunity since that tweet to hear and consider other perspectives.

2/ I have always appreciated the significant support our Chinese fans and sponsors have provided and I would hope that those who are upset will know that offending or misunderstanding them was not my intention. My tweets are my own and in no way represent the Rockets or the NBA.

Los Angeles Clippers assistant coach Sam Cassell will be added to Doc Rivers’ staff with the #Sixers, according to sources. That was the expectation if he didn’t get a head-coaching gig. pic.twitter.com/aDnLCtozB0

Cassell played many years in the league, winning championships with Houston and the Boston Celtics. He was also a key member of the 2000-01 Milwaukee Bucks team that the Sixers outlasted in seven games to win the Eastern Conference that season.

Burke is most recognizable to Sixers fans because of comments he made last December after the Pacers lost to the Sixers. He told Fox Sports Indiana, “I hate that team. I really wanted to win that game. I think (Joel) Embiid gets away with a bunch of crap the league ignores and it would’ve been a good one to just walk away from.”

The comment obviously went viral, which resulted in Burke telling Fox Sports Indiana that he shouldn’t have used the word “hate.” He said the Sixers' physicality had a lot to do with his remarks, adding that he’s not fond of other opponents as well.

Even after Dan Burke said he hates the 76ers, Brett Brown says the #Pacers assistant has an open invitation to his Christmas dinner. (But he better be nice to Joel Embiid if he wants dessert.) pic.twitter.com/7Rhy7cqUbM

Anyway, once word of Burke coming to the Sixers circulated on Wednesday, Embiid tweeted, “Yes sir!!! Now we can enjoy together what the league lets me get away with #PhillyForever.”

Yes sir!!! Now we can enjoy together what the league lets me get away with #PhillyForever https://t.co/7hctLSilCV