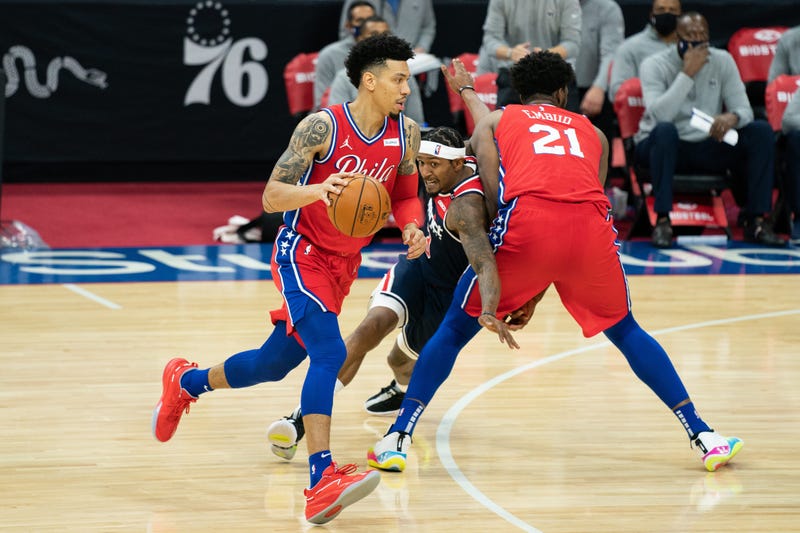 PHILADELPHIA (KYW Newsradio) -- There are a couple of ways to look at the 76ers' 113-107 victory over the Washington Wizards in their season-opening game on Wednesday night.

On the one hand, the Sixers showed the same lackluster play that plagued them last season, falling behind by double digits, yet they still managed to win in the end.

On the other, the fourth-quarter comeback was very impressive, and if they can maintain that consistency, maybe this team could be special.

The Sixers trailed the Wizards by 10 after three quarters thanks to a dreadful 15-point period after halftime. Then, Joel Embiid took over with 15 of his 29 points in the final frame — a quarter in which the Sixers outscored their opponents 40-24.

Embiid said Washington had to respect the shooters the Sixers had on the floor, which opened things up for him.

"Just get me the ball, and just let me do what I do best," Embiid said.

Last season, the Sixers lacked shooting. This year, they've added some to the roster.

Joel Embiid scored 15 of his 29 points in the fourth quarter of the #Sixers 113-107 win over the #Wizards. Embiid explained floor spacing helped open things up in the last 12 minutes.

"I knew it was time to get going especially after that pitiful third quarter." pic.twitter.com/QuBR2j6Ee3

New head coach Doc Rivers, who tied Hall of Fame coach Bill Fitch for 10th all-time in wins Wednesday night with 944, explained after the game that the Sixers kept running a similar play in the fourth quarter that was working, and the Wizards were having a hard time stopping it.

"You fall on a play, and you stay with it until they stop it," he said. "I think we scored six out of seven on the same action, and it’s great. I told them, 'That’s what you do. Feed the pig. If they can’t stop it, keep running it.'"

#Sixers head coach Doc Rivers on their successful fourth quarter offense in their 113-107 season opening win over the #Wizards.

"I told them, ‘That’s what you do — feed the pig. If they can’t stop it, keep running it.’" pic.twitter.com/naOttTWOLg

Milton carried his impressive preseason into the opener by scoring 19 points off the bench. He played every second of the fourth quarter, while making his coach happy on both ends of the floor.

"He was so good offensively. We needed to keep him on the floor," Rivers said. "And he ends up (defensively) on (Wizards star) Bradley Beal; he does a terrific job. He ends up on (fellow Wizards star and former NBA MVP Russell) Westbrook; he holds his ground."

Milton was part of a second unit that gave the Sixers a jolt after a sluggish start and awful third quarter.

"It definitely gives us a boost," Milton said. "I think that’s our job. You have to see how the game is being played. And when we come, it’s our job to make sure the pace is at a high level, we’re moving the ball, we’re sharing the ball, and we’re making smart basketball plays."

Ben Simmons put together a quiet and very Simmons-like complete stat line of 16 points, nine rebounds and seven assists. Afterward, backup center Dwight Howard and Matisse Thybulle, who only played for seconds in the final minute for defensive purposes, stayed on the court to get in extra shots and work.

Simmons said Howard has been pushing him to get better.

After the #Sixers beat the #Wizards 113-107, Ben Simmons, Dwight Howard and Matisse Thybulle stayed on the court to put up extra shots. pic.twitter.com/zDHE5vHEg5

The Sixers certainly have some work to do this season. They can’t afford to go without any points for almost half of the third quarter. The starters need to be more in sync and productive from the opening tip.

Tobias Harris, for one, struggled from the floor, shooting only three of 13 and zero for four from three-point range.

"He just missed shots," Rivers said. "I thought he was hesitant. ... We’ll watch the film. We’ll get him uncaged. He’ll be fine."

New Sixer Danny Green scored only two points in 18 minutes and didn’t play the fourth quarter -- rare for a starter. Last season, Green played for the World Champion Lakers, so he didn’t get out of the Disney bubble until mid-October. Rivers pointed to that when asked about Green’s early struggles.

A win is a win, but if the Sixers are going to make noise this season, they need to beat teams like the Wizards by more than six points and without furious fourth-quarter rallies.

Rivers said, "What I loved about the game is we didn’t play well. We had stretches that we played well, and you can see in that little third quarter, body language was struggling, and they caught themselves. They found a way to win. The execution down the stretch of the fourth quarter, for a team that hasn’t been together, was unbelievable on both ends."

"Overall, I loved the win." pic.twitter.com/vAxedjipXf

Even though there weren’t any fans at Wells Fargo Center for Sixers opening night, the organization continued some fan traditions, such as playing the sounds of chants and boos to distract the the opponent during foul shots.

They also had the ceremonial pregame bell ring, which on Wednesday featured cornerstone players Embiid and Simmons -- a fitting choice for opening night.

Despite speculation and debate over how well the pair can coexist (a narrative that carries more weight for some than others) and trade rumors involving Simmons and Rockets superstar James Harden (which the Sixers have publicly denied), the organization has made it clear they want to keep the young All-Stars together. 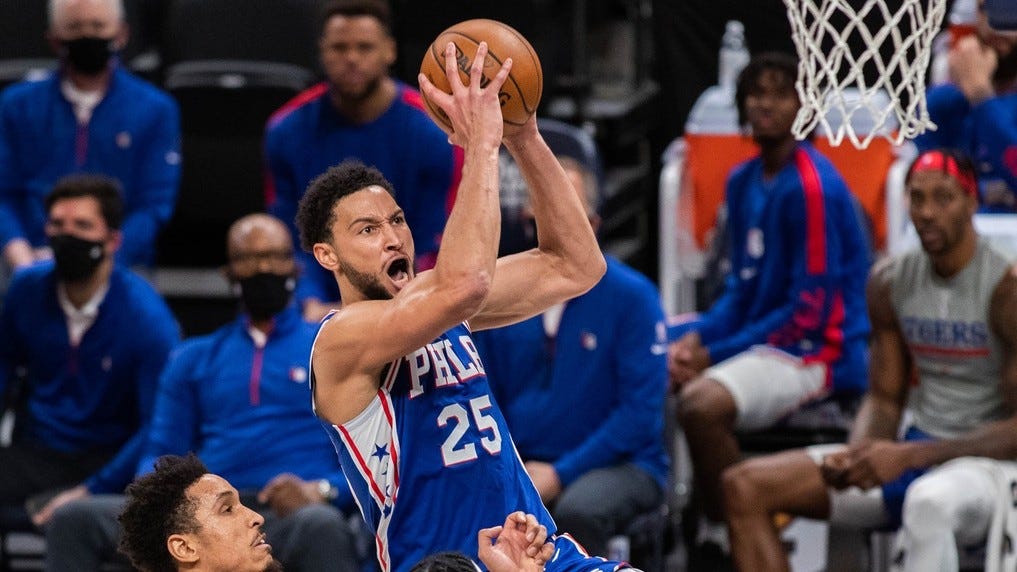 Simmons sounded the first of three rings, then Embiid, and then the pair together.

What a way to start this season. pic.twitter.com/NCwXJL6TUb

Before the game, Rivers emphasized that these two stars, now in their fourth season playing together, are going to be attached at the hip.

"They're gonna be tied at the hip."

Doc Rivers on encouraging Joel Embiid and Ben Simmons to do a joint interview, as noted in Jackie MacMullan's ESPN feature on this season's #Sixers. https://t.co/zHWoYHYBWw pic.twitter.com/VUkdjtKS3z

It’s no secret the pandemic itself and related economic restrictions have significantly hurt small businesses.

So every game day, the Sixers say they will highlight a small business on their social media platforms, which has over 6 million followers.

Fans can nominate a small business for this opportunity at sixers.com/smallbusiness.