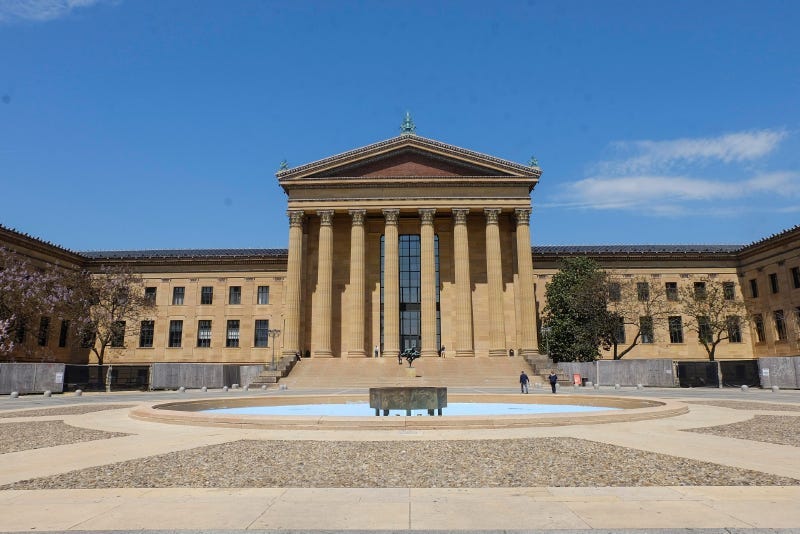 Work from 13 local artists is being added to the permanent collection of the Philadelphia Museum of Art. Photo credit Holli Stephens/KYW Newsradio
By Hadas Kuznits, KYW Newsradio

PHILADELPHIA (KYW Newsradio) — People may love being in a museum, but 13 local artists can now say they are really in the Philadelphia Museum of Art. Political art they created for a project connected to the start of the administration of President Joe Biden and Vice President Kamala Harris are now part of the museum's permanent collection.

Conrad Benner, creator of Streetsdept.com, an influential blog about Philadelphia street art, said he was inspired last year by the power he saw in posters displayed in windows all around the city.

"Seeing so many posters in peoples' windows during the last year — the pandemic, Black Lives Matter, and then with the elections — some people were using their windows to communicate things to their neighbors," Benner said.

"Ads and messages and art in a public space create change."

So Benner commissioned 13 Philadelphia artists to create posters that reflected the issues local communities most wanted the Biden/Harris administration to tackle in its first 100 days.

What are some things y’all want Biden/Harris to fight for in their first 100 days?

The "First 100 Days" project produced these 13 political posters, which are now being added to the Philadelphia Museum of Art's permanent collection. Photo credit Courtesy of Conrad Benner, StreetsDept

Natalie Hope McDonald, one of the participating artists, says her peers called on issues such as immigration, poverty and student loan debt.

"I happen to deal with the COVID-19 vaccination process," she said.

IT'S OFFICIAL! Super excited to announce that the art I created for the First 100 Days project has been added to the...

The result was a historical snapshot of what was happening politically at the beginning of this new administration. Like these posters, Benner says, most of the work he supports tends to be temporary by nature.

"Whether they pop up in the public space or a poster project like this, these posters aren’t going to live in people's windows forever."

"They asked me if I’d be sort of interested in donating some of the posters to the museum's permanent collection," Benner said. "I mean, how do you say no to that?"

He says being affiliated with the museum is astounding and it brings the project to another level.

"To think that, like, 300, 400 years from now, there could be an exhibition about protest art from this moment in time, from this century, and the posters could very well be included in that, is just incredible."

In addition, each participating artist was given a free lifetime membership to the museum

The "First 100 Days" project was funded by Mural Arts Philadelphia.