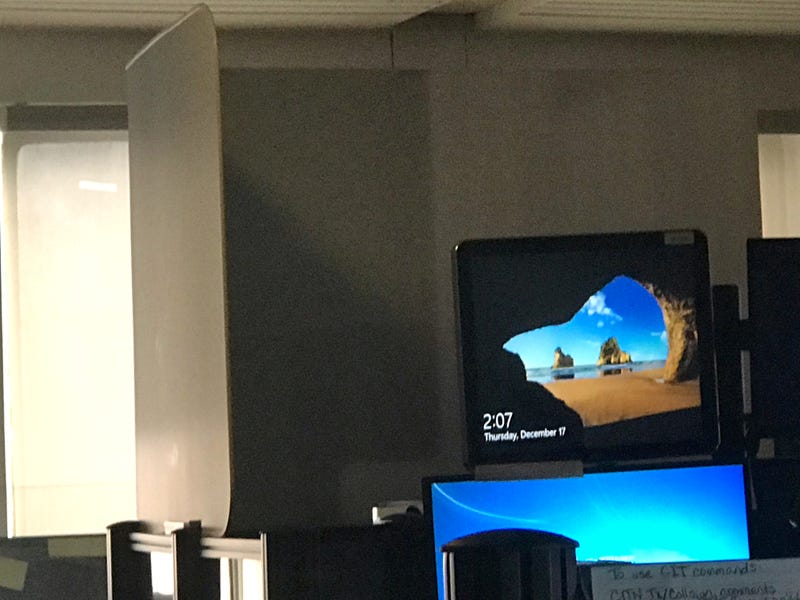 AFSCME Local 1637, the labor union representing Philadelphia 911 dispatchers, says requests for COVID-19 protective measures, like Plexiglas dividers, have gone unheeded. Instead, some are separating their spaces with cardboard. Their close contact has infected some and forced others to quarantine, straining remaining staff to take on extra shifts. Photo credit AFSCME Local 1637
By Pat Loeb, KYW Newsradio

PHILADELPHIA (KYW Newsradio) — At an online town hall with City Council on Thursday, Philadelphia 911 dispatchers complained about the high toll that COVID-19 is taking on them.

State law requires 43 dispatchers to be on duty at all times, which makes it difficult to practice social distancing, according to their union’s business agent, Darnell Davis. He said requests for other protective measures, such as Plexiglas dividers, have gone unheeded.

“As of today, they have five Plexiglas dividers to separate 43 people,” he said. “The rest of the things they’re separating them with is cardboard boxes, dividers that they put up.

“This is just not fair to anyone.”

Davis said this has resulted in a high number of positive COVID-19 cases among dispatchers, forcing many others to quarantine because of their close contact. There are currently three people out with the virus and 20 more quarantining.

Union officials say 30 of the 220 dispatchers have gotten COVID-19 since March, and dozens more have had to take time off to quarantine.

Frank Halbherr, president of labor union AFSCME Local 1637, said this puts a strain on workers who are already being pressed into extra shifts.

“We are so understaffed, and then it’s a perfect storm,” he said.

One dispatcher, Melissa Distasio, said the job has taken an emotional toll on her.

“I didn’t sign up for the anxiety when I come home to my child, who has an autoimmune disease; and a husband with health concerns; a stepfather in the age bracket that I am terrified I’m going to get them sick,” she said.

The union is asking that the dispatchers be spread out among other locations, like the 311 call center in City Hall, and adding preventative measures, like those Plexiglas dividers and air purifiers.

No police officials attended the virtual town hall, but a spokesperson said in an email that the Philadelphia Police Department is following prevention guidelines, and it’s working to improve the environment and alleviate the stress associated with staffing issues.