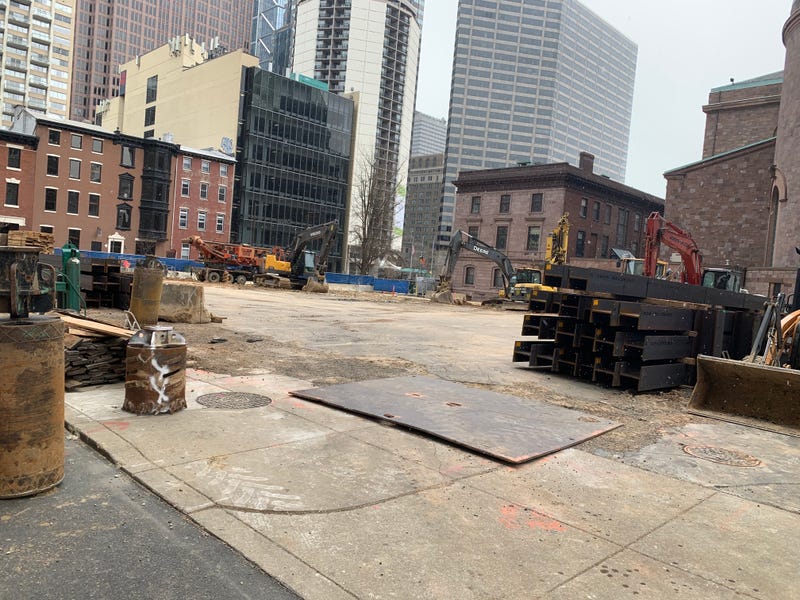 The Archdiocese of Philadelphia has taken a major step toward redeveloping a portion of the cathedral block at 17th and Race streets into a new high-rise apartment building. Photo credit Mark Abrams/KYW Newsradio
By Mark Abrams, KYW Newsradio

PHILADELPHIA (KYW Newsradio) — The Archdiocese of Philadelphia has taken a major step toward redeveloping a portion of the cathedral block at 17th and Race streets.

Despite the current economic situation brought on by the coronavirus pandemic, the archdiocese decided to stay the course for the planned construction of a new high-rise apartment building.

The project reached the first milestone of its initial phase last month.

“Phase 1 called for the demolition of the old cathedral convent, which had been built in 1957,” said spokesperson Ken Gavin. “It was a building that had not been utilized in several years and had a number of ongoing deferred maintenance issues.

“That demolition has been completed and at this point, they’re clearing out the foundation over there.”

Gavin said preparations are underway for the next step: “The construction — at least as it’s envisioned by the master developer — of a 23-story building on the land where the convent sat, as well as the parking lot area over there on that southern side of the archdiocesan pastoral center.”

He described the plan: “Twenty-three stories that would include approximately 273 apartment units, 2,500 square feet of ground-floor retail, and approximately 18 underground parking spaces.”

The archdiocese is working with a master developer on the project and will retain ownership of the land, Gavin added.

Proceeds from the project will be directed to the compensation fund for victims of clergy abuse. VIDEO: Trump Plaza disappears in a cloud of dust in Atlantic City