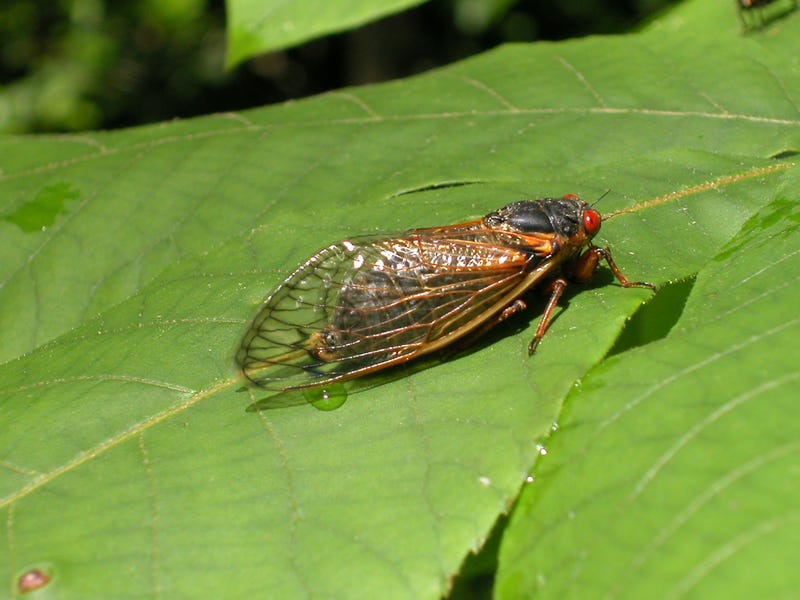 After 17 years living below ground, billions of cicadas belonging to Brood X are beginning to emerge across much of the eastern United States. Photo credit Richard Ellis/Getty Images
By Charlotte Reese, KYW Newsradio

PHILADELPHIA (KYW Newsradio) — The weather is getting warmer, and the cicadas are coming — not only the ones that come every year, but some special ones that have been hiding for more than a decade. And with them, the natural song of summer.

"You're not going to be able to not hear them. They’re pretty loud," said Dr. Christopher Tipping, professor of biology at Delaware Valley University.

Tipping recently joined the KYW Newsradio In Depth podcast to talk about what’s about to happen. He says that incessant, shrieking buzz is coming soon.

"Probably four weeks, five weeks, depending on temperature, is something called 'Brood X' of a type of cicada that lives underground for 17 years."

The bugs have been feeding off of tree roots, and now they’re ready. The Brood X cicada nymphs are tunnelling upward to emerge from the surface of the ground. Tipping said a good 2-acre yard with old trees could have about 50,000 of them.

These bugs won’t be green and black like the annual cicadas. These will be red and black.

"In the middle of Philadelphia, should folks be seeing them? You could, maybe, within Fairmount Park or some of the other places where there are old trees, there could be some numbers of them," he said. "But I think outside in the country, away from suburbia, where the trees and the forest have been intact for decades, we're going to see a good number come out."

Brood X is one of 15 broods of periodical cicadas and covers a wide swathe of the eastern United States from Indiana to New Jersey.

The good news is they won't be around for long. As the cicadas shed their skins, leaving them behind on trees and elsewhere, they mature into adults. Those adults fly away, mate, lay eggs and die — all within a few weeks. 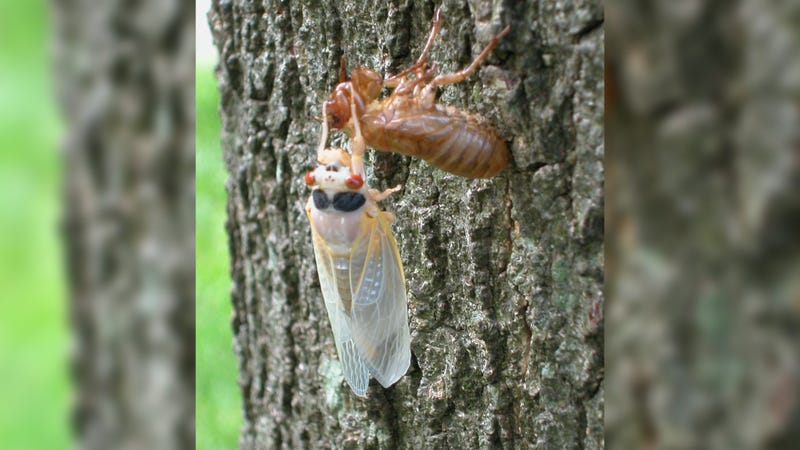 Tipping says birds are the bugs' main predator. With so many of them emerging all at once, he says, there could be a concurrent rise in some bird populations.

"Two years from now, there’s not going to be that kind of food resource," he said. "Bird numbers will probably go back down to some sort of equilibrium. Meanwhile, the ciacas are down in the soil, feeding on tree roots 17 years or 10 years, 13 years, depending on what brood they are or where they live. Then they come off again."

And aside from the extra noise, Tipping says they might be a nuisance to younger trees.

"The females have a structure called an ovipositor that they use to actually saw into the wood, and they lay the eggs into that. And then, when those eggs hatch, the little ones fall out, drop into the soil and then begin their life cycle."

Tipping suggests homeowners cover up any younger trees in the yard to protect them from damage. He says he’ll be covering his blueberry bushes, but he advises casual gardeners not to be too concerned.