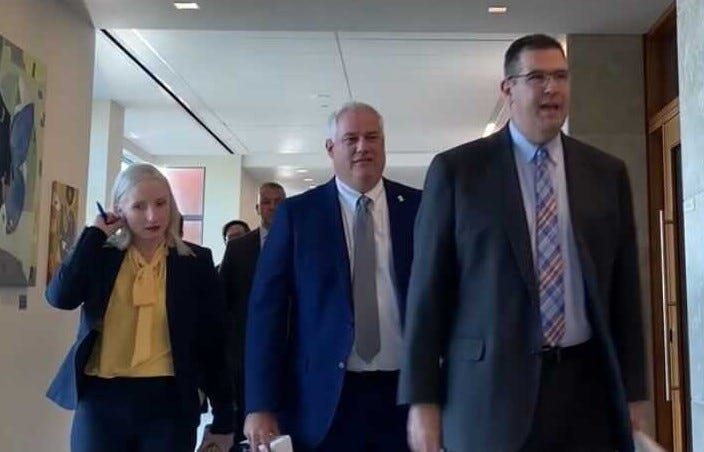 PHILADELPHIA (KYW Newsradio) — The second-in-command in the Bucks County District Attorney's Office has been demoted after he was caught driving for DoorDash while he was expected to be working during office hours.

District Attorney Matt Weintraub said Gregg Shore is still with the office, but has been replaced as first assistant district attorney by Jennifer Schorn.

Shore drove for the food delivery service during office hours from October through February. According to public records, his salary with the District Attorney's Office was $125,435 in 2019.

Weintraub said Shore has paid the lost hours back to the office. But the district attorney called it a betrayal of trust and of Shore's obligation to the people of Bucks County.

"What he has done is indefensible, thoughtless, selfish and so stupid to border on the ridiculous," he commented.

Weintraub said he is demoting Shore rather than firing him as he says he wants to practice what he preaches, that one mistake should not ruin a career and a long history of public service.

Shore told KYW Newsradio he was driving for personal reasons, primarily at night.

"However, I made the incredibly poor decision to deliver during the workday at times," he admitted. "In doing so I realize that I betrayed my boss, my colleagues, and most importantly, the citizens of Bucks County."

Shore was named first assistant in 2017. He was the lead prosecutor in the Sean Kratz and Cosmo DiNardo cases. Those cases had a national following after four men went missing, their bodies eventually found on a farm owned by DiNardo's family.

Shore started with the Bucks County District Attorney's Office in 1996 and returned in 2015. In between, he served as a special assistant United States attorney, and as Pennsylvania's deputy secretary of labor.

Schorn, who has been with the office since 1999, takes over as first assistant. She is also chief of trials and chief of the Grand Jury division. She handles high-profile cases including murder and other major crimes.

Weintraub said she is deserving of the job and has been a warrior in the courtroom.