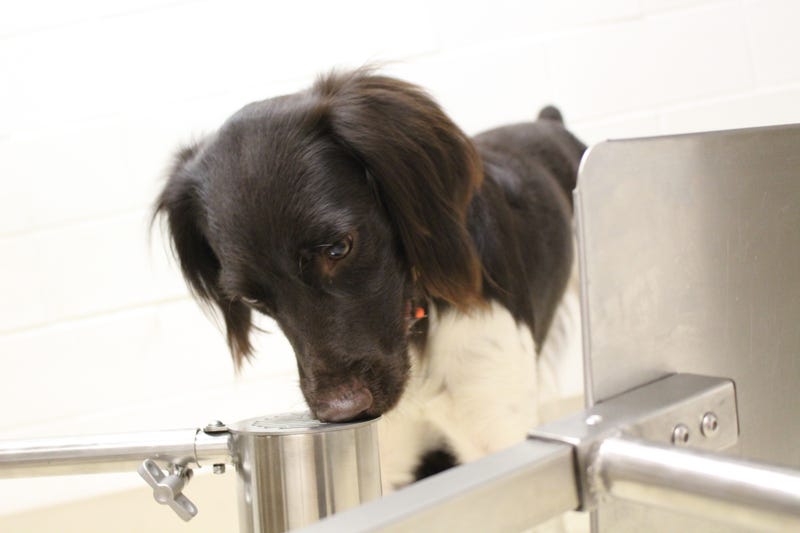 PHILADELPHIA (KYW Newsradio) — The destructive yet beautiful spotted lanternflies have been wreaking havoc on backyard farmers and Pennsylvania’s agriculture industry. Researchers hope a new tool will nip the nuisances in the bud.

Those tools are named Toby, Grizzly and Pacy — research dogs trained to identify the scent of spotted lanternfly egg masses.

The canines started training last fall with the Penn Vet Working Dog Center. Dr. Jennifer Essler, one of the lead researchers, said the dogs first practiced in the laboratory by sniffing the egg masses off of tree bark or other surfaces.

“We know that dogs have amazing noses. We know that they are used in a lot of other situations to search areas larger than people can at that speed, and so we’re like, maybe dogs can fit here too,” she said.

She said they had to get the dogs to focus on the eggs and where they’re located, rather than the scents of surrounding elements.

“We want them to really hone in on the egg masses,” she said, “so we had to make sure they weren’t interested in leaves or tree bark or any number of other things.

“Do these egg masses have an odor that they can distinguish? You can imagine the number of background odors that exist in forests or in pallets of wood or in cars, so the question for us was, can they do it?”

After six months, the answer appears to be “yes.”

Essler said the initial research wrapped up earlier this year, just as the coronavirus pandemic hit. Toby, Grizzly and Pacy are helping with other research projects.

Now Lucky, an 18-month-old German shepherd, is being trained for active duty with the Pennsylvania Department of Agriculture.

“She’s the first spotted lanternfly dog that we've trained and are sending out into the world,” Essler said.

Lucky is two weeks into her training and should wrap up by the end of October, which is perfect timing. That’s when spotted lanternfly egg masses are laid in nature, waiting to hatch in the spring.