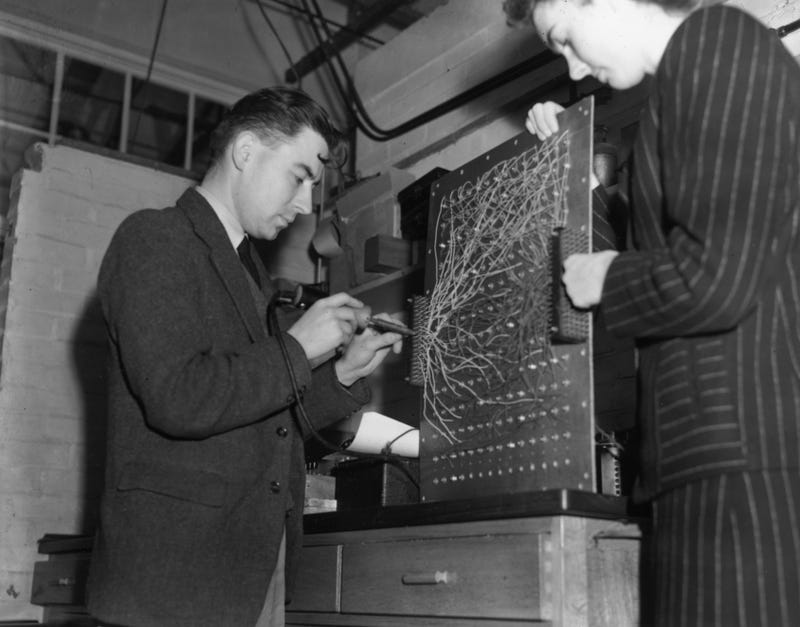 PHILADELPHIA (KYW Newsradio) — A little more than 75 years ago, scientists across the world were realizing they needed a machine to do equations faster than humans could. Dr. Brian Stuart, professor of computer science at Drexel University, says people around the world were working on these ideas, notably in Germany, at Harvard University, and at Bell Labs.

But it was John Mauchly who ended up figuring out the blueprint for the world’s first computer, after taking a summer course at the University of Pennsylvania and meeting J. Presper Eckert.

When World War II consumed Europe, the US government needed fast and accurate calculations to advance the war effort. So the government invested in Mauchly and Eckert’s plan, which eventually became the Electronic Numerical Integrator and Computer, or ENIAC.

“In some sense you can almost think of the machine as a very large number of desk calculators all connected together in such a way that one calculator can pass its numbers on to the next, and so on,” Stuart described.

By late 1943, Eckert and Mauchly had assembled a prototype and then it became “more of a construction project.” The ENIAC machine ran along the walls of a room that was bigger than 32 feet by 16 feet.

Stuart says by early 1944 the two men were already starting to think about their next machine.

“So it turns out the machine didn't end up being used for the war even though war needs is what funded it.”

The ENIAC performed top secret work for the US government in the winter of 1945, running calculations for a project that was later declassified and revealed to be nuclear weapons development.

“So since the war was over (and) the machine was now working, the army decided to publicize it and make it public,” Stuart said. “And that’s what we are about to celebrate is the 75th anniversary of that public unveiling of that machine in February of 1946.”

The ENIAC, as Stuart puts it, “set the stage” for the computer construction, performance, and programming developments and innovations of the next 75 years.

People can register for the Venture Cafe special event featuring Stuart and other computer scientists involved in the ENIAC presentations.

“People will be able to come and ask any question that occurred to them when they were watching the videos,” he said, “and dig a little deeper into everything that's gone on since then really kind of right here where it all started.”