PHILADELPHIA (KYW Newsradio) — The Sixers’ ownership group is losing one of their most recognizable members. Michael Rubin, the CEO of Fanatics, the world's leading provider of licensed sports merchandise, is selling his 33% stake in Harris Blitzer Sports and Entertainment, which runs the Sixers.

Rubin said in a letter to Sixers fans that, with Fanatics beginning to have personal contracts with athletes via trading cards and collectibles, as well as a soon-to-be-launched sports betting operation, it would be a conflict of interest to be a part of Sixers ownership.

Rubin, who grew up in this area, has been a courtside fixture at Sixers games — bringing along big-name celebrities. 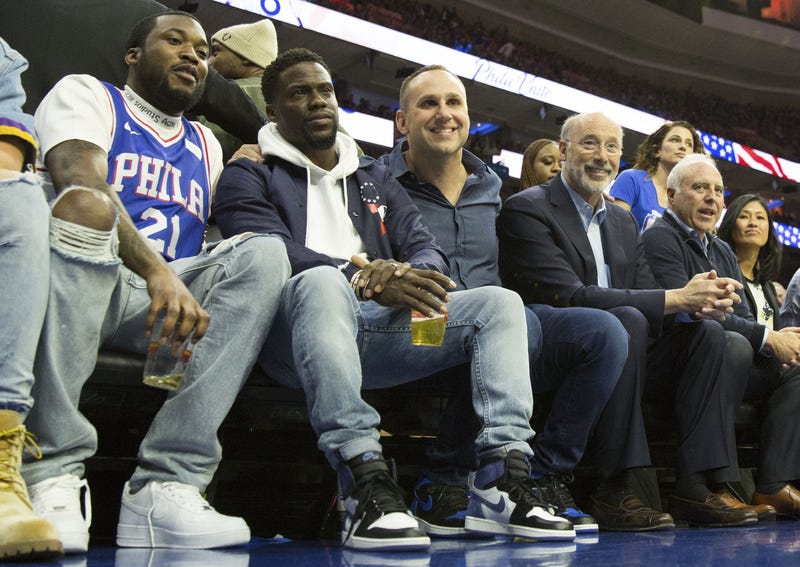 Who could forget, in 2018, when Meek Mill was freed on unsecured bail from the State Correctional Institution in Chester, and Rubin had a helicopter waiting for him to whisk him away to Wells Fargo Center, where he rang the bell prior to a Sixers-Heat playoff game? (See image above.)

Fox Sports NBA writer Yaron Weitzman told KYW Newsradio that it's hard to tell what the immediate impact of Rubin selling his stake will be. He says Rubin is very involved behind the scenes.

Yaron Weitzman on the impact

“Him and Embiid are legitimately close," Weitzman said. “He played a role in bringing [James] Harden …. He was the driving force pushing the Sixers to go after [President of Basketball Operations] Daryl Morey. He had a role in [head coach] Doc Rivers …. And I do get the feeling that, in recent years, [managing partner] Josh Harris has leaned on him a little more."

Fanatics CEO Michael Rubin is selling his minority stake of the Sixers. Fox Sports NBA writer @YaronWeitzman explained to @KYWNewsradio what the impact of this will be. pic.twitter.com/8s2vr2na1K

Harris, the face of ownership, thanked Rubin for his partnership.

Rubin retweeted Harris and added, "I will always be here to help."

Weitzman explained that, even though Rubin is stepping aside due to conflict of interests with his growing Fanatics business, he can still essentially help the 76ers in many ways through his connections, without being confined to NBA rules. So, while it’s clear Rubin no longer has an official stake in the team, it’s also evident that he can still make an impact if needed.

As Michael Rubin indicated on Twitter, Fox Sports NBA writer @YaronWeitzman talked about how Rubin can still help the Sixers even though he's selling his share of the team. @KYWNewsradio pic.twitter.com/CNhjRhAuH1

Michael Rubin may be selling his Sixers shares. But don't expect him to stop helping the Sixers.

“I’ll probably go to less games," he told @FOXSports, "but when there's something going down that's massive, I'll stop what I'm doing to help."https://t.co/7WLqTElLlD