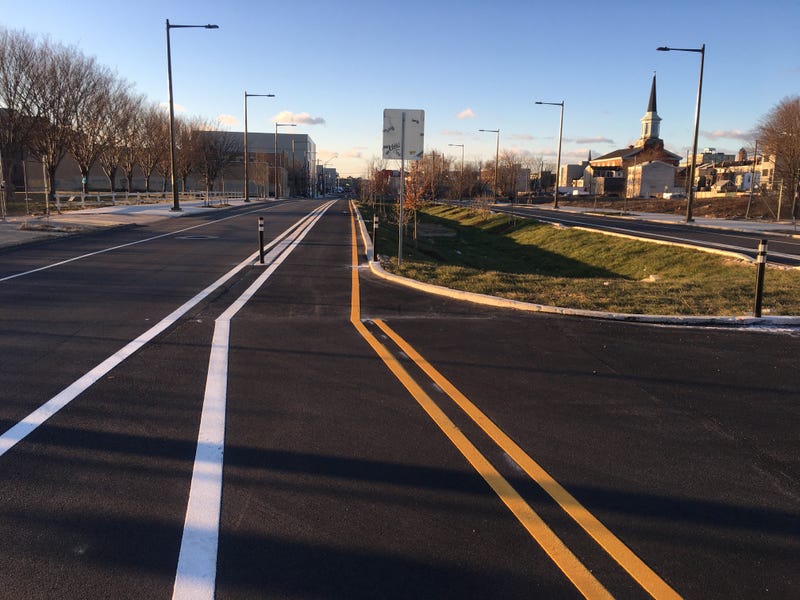 Bike lanes have become pretty common in Philadelphia, and there are many different types. Usually, bike lanes are designated between the sidewalk and traffic, or they’re protected by yellow delineator posts.

“And then you have raised bike lanes where there is some sort of curb or elevation difference between the travel lane and the bike lane. On American Street, that’s the type that we have,” explained Darin Gatti, Philadelphia Streets Department chief engineer.

This new protected lane will be in the middle of the street — and there’s a reason for that.

“We put the bike lanes in the middle of the street along the center median. And it’s a raised bike lane, so there’s a concrete strip that’s up 3 to 4 inches higher than the travel lane,” said Gatti. “With all the driveways along this corridor, especially driveways where the trucks are coming in and out, it does create real safety conflicts for bike lanes and also bus stops. The bus constantly pulling in and out, that creates conflicts.”

The protected lane runs between Girard and Indiana avenues. American Street is part of a large redevelopment project, which includes a wide center median with a green infrastructure to drain stormwater.

Gatti said the $26 million project is 80% complete. The city is responsible for 20% of the cost. The rest is split between state and federal funding.

Gatti expects it to be complete by late spring.