EAST GREENWICH TOWNSHIP, N.J. (KYW Newsradio) — People in Gloucester and Camden counties have been holding their noses since Wednesday afternoon, complaining of a foul odor some are comparing to natural gas and rotten eggs.

As South Jersey continues to air out, officials are emphasizing to residents that there is no cause for alarm. East Greenwich Twp. Chief of Police Matthew Brenner says it's nothing more than an unpleasant scent.

"Although the odor was strong and pungent, the air quality was not detecting anything harmful for our localized residents or businesses," he said.

So far, police say they haven’t found anything suspicious. Investigators on Wednesday quickly isolated the source of the odor to the TA Travel Center on Berkeley Road just off I-295.

Additional emergency crews heading to the scene where they’re investigating the odor, people from around Gloucester and Camden counties report smelling. @KYWNewsradio pic.twitter.com/YGOXdBqXXF

State and local investigators say that chemical gas is doing what it's supposed to do. Shortly after 3 p.m., officials say, high temperatures triggered a tanker truck carrying a chemical called Lubrizol 13-89, a fuel additive, to start expelling the fumes.

"This product was in the tank and was being expelled in a gas form through a pressure-release valve on the back of the tank," Brenner said.

According to a statement from Mayor Dale Archer, part of what residents are smelling is an odorant called mercaptan. It is added into chemicals like Lubrizol to help ensure that leaks do not go undetected. 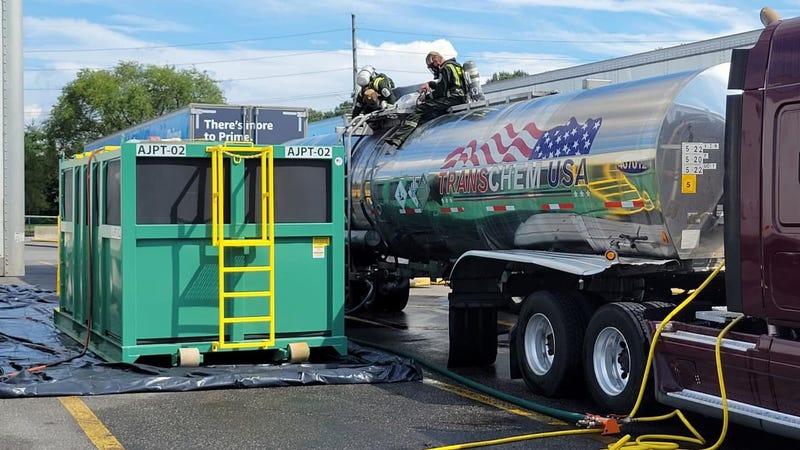 Representatives from Transchem, the company hired to transport the chemical responsible for the foul odor over South Jersey, have been on the scene to monitor air quality and coordinate with public health officials. Photo credit Gloucester County Office of Emergency Management

Those fumes have since been carried on the wind across towns all over South Jersey, and into areas as far as parts of Philadelphia.

Gloucester County Emergency Management issued a shelter-in-place late Wednesday night for East Greenwich, Paulsboro, Gibbstown and areas close to the TA Travel Center due to “a large gas release from the trailer.” It was lifted within a few hours. And customers at nearby businesses were also briefly evacuated.

Although strong and pungent, the odor is more of a nuisance odor, and generally harmless. This odor may affect each...

Hazmat workers from Gloucester and Camden counties, and representatives from the New Jersey Department of Environmental Protection, EPA and other agencies have been on the scene. Officials monitoring local air quality insist there's no hazard.

"It's more of a nuisance right now," said Annmarie Ruiz with the county health department, "but if you do experience any mild irritation, like eye itching, sore throat, vomiting, headache, we ask that you seek medical attention."

Officials recommend anyone nearby to stay indoors to avoid the smell. They say the odor will linger for some time.

In a statement released Thursday, Lubrizol, the chemical's manufacturer, said the trucking company transporting the chemical is "investigating the incident and leading the response with local authorities," and specialists are on site to coordinate with first responders and local health officials.

The Gloucester County Department of Health has opened a call center for concerned residents. People can call 856-384-6800 between 8 a.m. and 4 p.m. for further guidance.