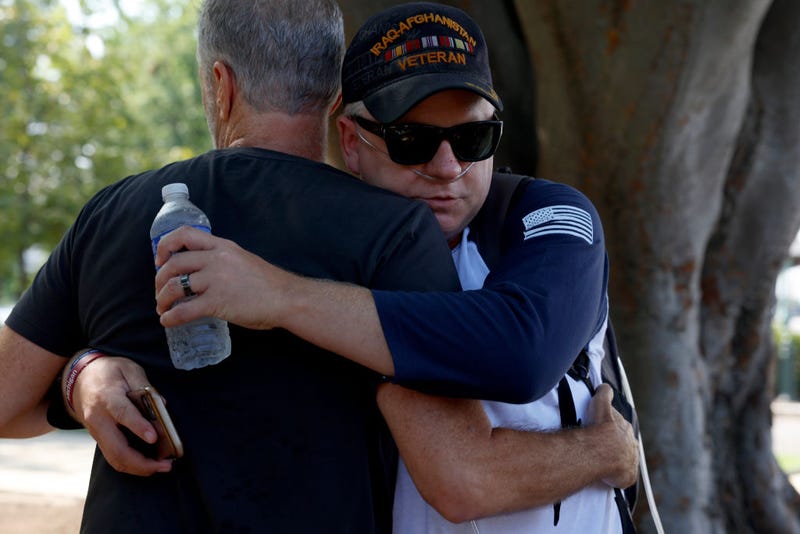 WASHINGTON, DC - AUGUST 02: Comedian and activist Jon Stewart hugs a Kevin Hensley, an Iraq and Afghanistan war veteran, at a demonstration for the PACT act outside the U.S. Capitol Building on August 02, 2022 in Washington, DC. Demonstrators from veterans-rights groups including the Wounded Warrior Project, Burn Pit 360 and the American Legion, have stood outside the Capitol Building in protest to call on the U.S. Senate to pass the PACT Act, a bill to expand health care benefits for veterans exposed to toxic burn pits. Photo credit Photo by Anna Moneymaker/Getty Images
By Mike Dougherty

CAMDEN COUNTY (KYW Newsradio) — After Joe Biden signed the PACT Act into law, one Gold Star mother from South Jersey explains just how much this new law will impact the lives of veterans and their families for the better.

Camden County Commissioner Melinda Kane lost her son, Lance Cpl. Jeremy Kane, in Afghanistan in 2010. Since then, she’s become an outspoken advocate for veterans and their families.

The PACT Act was the largest single bill ever to address the military’s exposure to burn pits while serving.

“Burn pits are the trash heaps that get set ablaze on military bases overseas to dispose of garbage, waste and unneeded items.” Kane explained. “It’s clear now that those burn pits often produce toxic fumes which have led to all sorts of health problems for service men and women.”

The problem is that the physical issues related to that exposure don’t happen immediately. “Veterans come back home, and sometimes it takes years [before] they start developing physical problems,” she said. “And these physical problems were often dismissed or the veterans then had to prove for themselves the correlation between the exposure to the burn pits and their health problems.”

Kane says this bill delivers on the promise of supporting the men and women who bravely served their country.

“There’s 23 specific conditions that the VA is now going to approve for health care and disability compensation.”

And she says much-needed benefits are extended to the family members of veterans who have passed away.

Veterans who are unsure of their eligibility should contact their local elected officials or congressional offices to find out more.