PHILADELPHIA (KYW Newsradio) — Several hundred women and other supporters of the Women's March movement took to the streets of Philadelphia Saturday, ahead of the election and amid the latest Supreme Court nomination, to say they refuse to go back to a time when certain people's basic human rights were not acknowledged.

Sam Goldman, with Refuse Fascism, said the current administration is afraid of protesters.

"Not of violence, let me be clear," she told the assembled marchers. "They were scared of the power of the people, and whether they would remain in power."

And period poverty activist Lynette Medley, of No More Secrets: Mind Body Spirit Inc., said that's why the Women's March is protesting with one of the main issues being Supreme Court nominee Amy Coney Barrett.

"I think our biggest concern is really losing autonomy over our bodies once again," she shared, "that it'll basically be something decided with courts, by men, decided by women who don't have the same experiences because of their privilege." 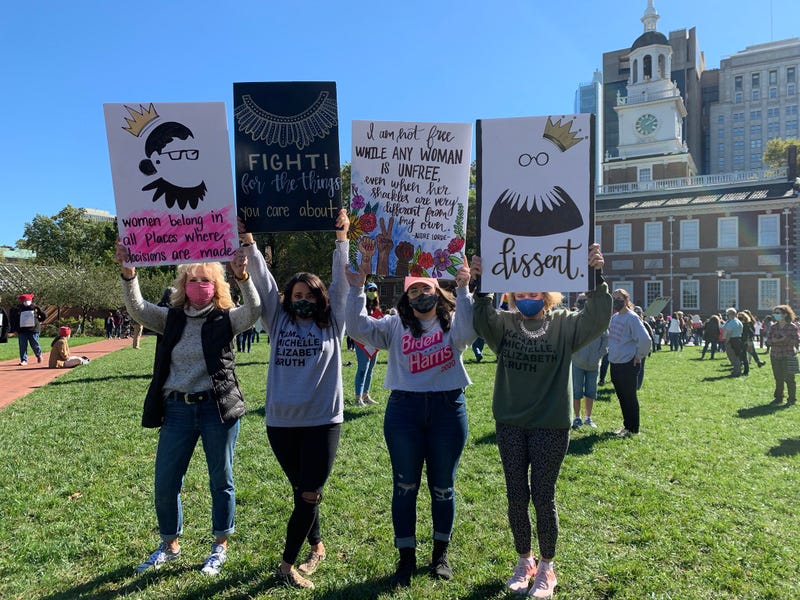 That's why she believes one of the most important issues of this election is getting disenfranchised communities to the polls.

"When you have a population that's been overlooked, dismissed, and disregarded for so long about every essential need that they have, now you come into the same community and ask them to vote. It's really about empowering them and understanding their vote can make a difference to make changes in our community," said Medley.

Jolynn Haney of Collegeville was among several hundred protesters, who marched from Independence Mall to the Philadelphia Museum of Art. This was her first protest.

"This is the first year I've ever had political signs in my yard," she admitted. "I'm almost 60 years old. It's emotional. I've never seen our country so bad, and I really think it's important we have to come together."

Goldman said the protests will only increase between now and Election Day.

For Haney, who attended with her daughters, her motivation was to help build a more decent world for their children.