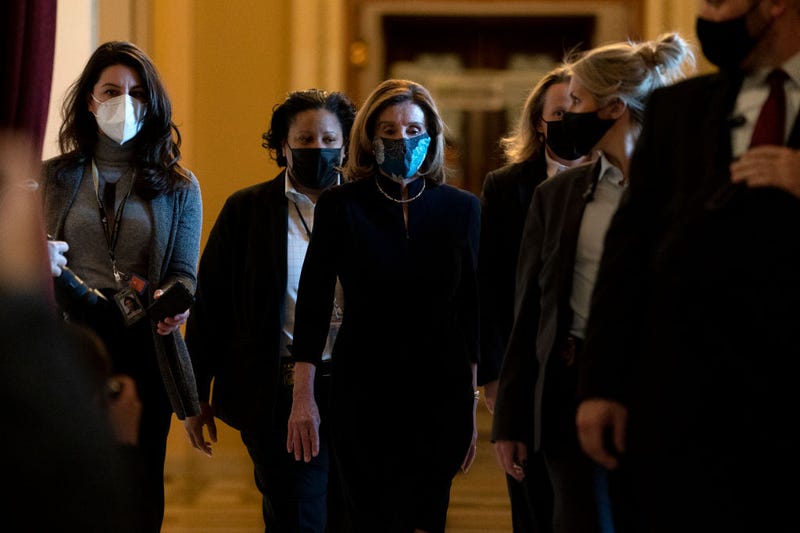 Speaker of the House Nancy Pelosi (D-CA) (C), surrounded by a security detail, walks to her office from the House Floor at the U.S. Capitol on January 13, 2021, in Washington, D.C. Photo credit Stefani Reynolds/Getty Images
By Justin Udo, KYW Newsradio

PHILADELPHIA (KYW Newsradio) -- With only a week remaining in President Donald Trump's term, he will be out of office before the impeachment proceedings currently before the U.S. House of Representatives would be allowed to conclude in the Senate. But Rutgers Camden law professor Perry Dane says it would have lasting effects on Trump's political future and his ability to run for president in 2024.

The House is expected to vote Wednesday on whether or not to impeach. House Democrats and some Republicans say Trump incited insurrection last week Wednesday, when a mob of his supporters stormed the U.S. Capitol.

"The article (of impeachment), in its most direct sense, is grounded in this rant that the president delivered at the White House on the morning of Jan. 6," Dane said.

The constitutional law expert says, while it is directly linked to the president's speech ahead of the deadly attack, it is the culmination of Trump's actions after he lost his reelection bid in November.

"Not only did he deny that he lost the election, but he was badgering state officials to try and reverse the results of the election," he said.

If the House votes to impeach the president for a historic second time, the Senate will take up the task of deciding the president's fate.

Dane, a onetime law clerk to Supreme Court Justice William Brennan, says the pressure is on lawmakers to prove the president has committed a high crime or misdemeanor.

"But the Senate could also vote to disqualify President Trump from running for office again."