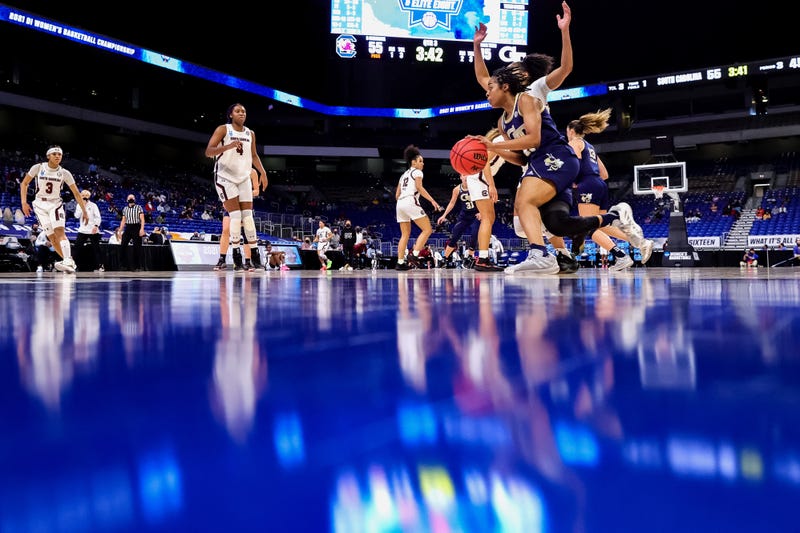 Kierra Fletcher of the Georgia Tech Yellow Jackets drives to the basket against the South Carolina Gamecocks during the second half in the Sweet Sixteen round of the NCAA Women's Basketball Tournament at the Alamodome on March 28, 2021 in San Antonio, Texas. Photo credit Carmen Mandato/Getty Images
By Charlotte Reese, KYW Newsradio

PHILADELPHIA (KYW Newsradio) — The NCAA said it will conduct a review of its championships, after some pretty stark inequities came to light during its men's and women's basketball tournaments.

A player's photo went viral on Twitter showing a fully stocked weightroom for the men side by side with a dozen dumbbells and some yoga mats for the women.

Dr. Karen Weaver, adjunct assistant professor at the University of Pennsylvania, told the KYW Newsradio In Depth podcast that the inequities go even further than the photos show.

"If we go back to the campuses and host first or second rounds, which I know the coaches are not in favor of," she posited, "to move them to neutral territories to get them away from the regionalization of women's basketball, which inherently makes it different than what they do in men's basketball, because it's cheaper to keep the regional teams closer together and playing each other."

"So there's a number of inequitable decisions that have been made in addition to the ones we talked about this year that just haven't drawn the same amount of attention."

Weaver said one of the contributing issues is that the struture of the NCAA tends to lend itself to a focus on short-term execution, rather than long-term potential. She said that the organization's status as a committee-driven body, rather than one with singular leadership, is a factor.

"You're taking into account that all the ADs and presidents who are sitting in those rooms are as aware of the economic shifts of the marketplace as maybe you and I are. So they may continuously just look at it as another thing to check off each year, 'This is the way we've always done it and this is we'll do it going forward - and great that we're getting more but we have more expense because we had to buy more hotel rooms or pay for more food.'"