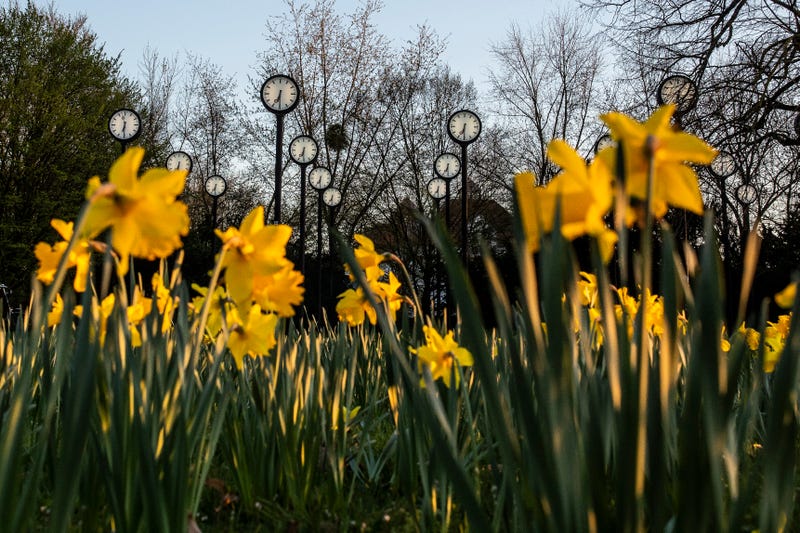 The "Zeitfeld" (Time Field) clock installation by Klaus Rinke is seen at the entrance of the Suedpark, on March 29, 2021, in Dusseldorf, Germany. On March 31, most European countries will move into daylight saving time. This could be one of the last such changes, since the European Parliament supported a proposal this week to end the practice after 2021. Photo credit Maja Hitij/Getty Images
By Mark Abrams, KYW Newsradio

PHILADELPHIA (KYW Newsradio) — A bill that intends to make daylight saving time permanent in Pennsylvania is picking up steam in the state House.

He said changing the clocks twice a year not only plays havoc with sleep schedules but also carries health risks.

“What we’ve seen is that there are more strokes, more car accidents, more deaths resulting from time change and that disruption in people’s schedules,” he said.

Mackenzie’s bill was recently adopted overwhelmingly — 23-2 — by the House State Government Committee and could be scheduled for a vote on the House floor this session.

“Fifteen states across the country have already done this, and we’re hoping to make Pennsylvania the 16th state,” Mackenzie said.

The states would have to work in tandem to weigh in, but ultimately it will be up to Congress to adopt any time-change bill. Mackenzie said there already is some bipartisan support in the U.S. Senate for it.

“What people dislike the most is changing the clocks back and forth,” Mackenzie added. “So really the question is do you go to permanent standard time or permanent daylight saving time?”

Pennsylvania House majority leader Kerry Benninghoff said there are some state lawmakers who prefer standard time be permanent, and he said he’ll add an amendment onto Mackenzie’s bill and allow debate on that too.

“I think this is a longer-term proposal that may play out over several years,” Mackenzie said. “But I think decidedly, the momentum is behind daylight saving time — not just in Pennsylvania but across the country and across the globe as well.”