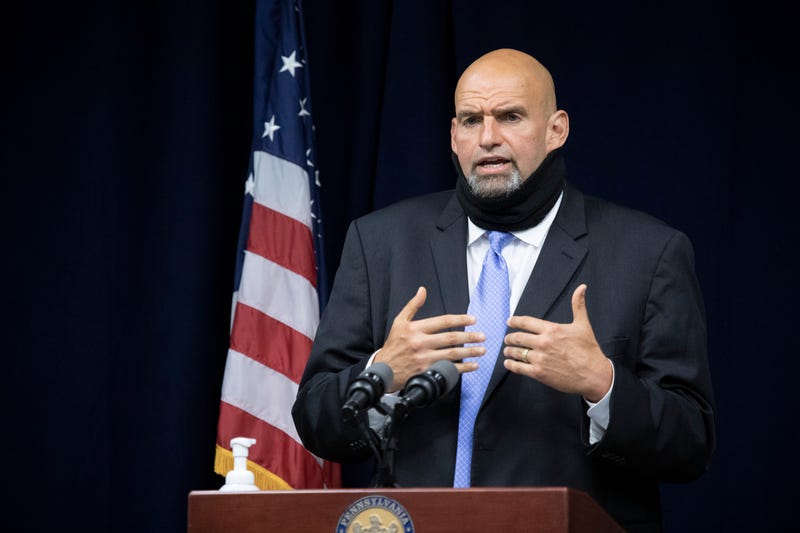 With nearly two years until the next election, Fetterman is the first major candidate to toss his hat into the ring.

Last month, Fetterman hinted at running for the seat currently occupied by Republican Sen. Pat Toomey. Toomey said he plans to vacate his seat next year.

Since then, Fetterman has already raised $1.3 million.

“We were just kicking some tires, looking under the hood, and the response was just overwhelming — 38,000 grassroots donors and counting,” said the 51-year-old. “The average donation is around $30.”

Thank you to the 37,000 grassroots donors who stepped up.

If you send me to the US Senate, I will always be 100% Sedition-Free.

We as a nation crossed lines I never thought we would-or even could.

My pledge to you: to hold core ideals like democracy + the peaceful transfer of power sacred, always. 🇺🇸

In a video posted Monday to kick off the campaign, Fetterman makes the case that he is uniquely qualified to win over parts of the state that shifted toward Republicans during the Trump era.

Fetterman had a failed Senate bid back in 2016 for the Democratic nomination, which eventually went to Katie McGinty. He also was the former mayor of the small town Braddock, located near Pittsburgh. He was elected to his current position of lieutenant governor in 2018 on a ticket with Gov. Tom Wolf.

The no-nonsense, tattooed, gruff progressive has not been without controversy. Just last month, Fetterman was removed from state Senate chambers for refusing to acknowledge a Republican-backed motion to not seat a Democratic lawmaker over a mail-in ballot challenge. The Democrat’s election victory had already been certified by the state.

Fetterman acknowledges he’s an early entry in the race, but he said he’s in it for the long haul and will campaign while carrying out his duties as the lieutenant governor.

Other candidates rumored to be eyeing the race include Rep. Conor Lamb, a moderate Democratic House member also from western Pennsylvania. Across the state, Philadelphia Mayor Jim Kenney, state Sen. Sharif Street, state Rep. Malcolm Kenyatta, and U.S. Rep. Chrissy Houlahan, among others, could end up vying for the lion’s share of the heavily Democratic vote in and outside Philadelphia.

A statement from the campaign spokesman for Sen. Pat Toomey — who has said he isn't running — blasted Fetterman and called him a "gimmick."

"John Fetterman’s look is nothing more than a gimmick.  He is not a biker, or working class, or blue collar – as he would like to have you believe.  He is a spoiled trust fund baby who worships at the altar of hardcore leftists, like Bernie Sanders.  He supports decriminalizing heroin, has mocked Pennsylvanians who have dared to question the Wolf-Fetterman economic lockdown and once even pulled a shotgun on an innocent, unarmed Black man.  In the end, this gimmick will fall flat, and Pennsylvanians will reject Fetterman," the statement read.

The spokesman later clarified Toomey still has no intention to seek re-election, they just want voters to be informed.