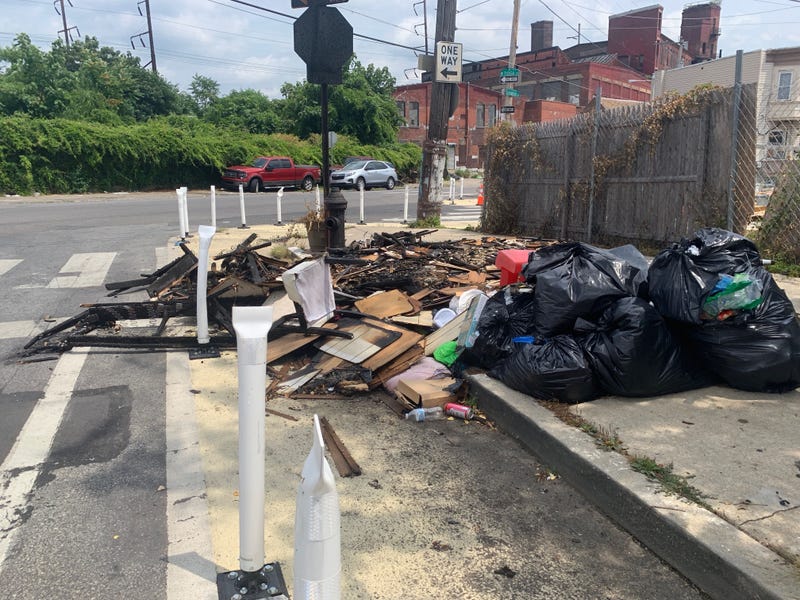 Someone has dumped and set fire to trash behind flexposts on Orianna Street intended to make the neighborhood safer. Two months after installation, some of the flexposts have simply been removed. Photo credit Pat Loeb/KYW Newsradio
By Pat Loeb, KYW Newsradio

PHILADELPHIA (KYW Newsradio) — After years of planning, and $1.5 million, Philadelphia’s Office of Complete Streets has finished its first “neighborhood slow zone,” in Fairhill. Residents say they aren’t seeing much of a difference.

You can tell you’ve entered the slow zone, bounded by Glenwood and Allegheny avenues, from Second to Fifth streets, by the white posts at every corner — meant to improve visibility for crosswalks and turns — and, of course, speed bumps.

“Very simple things so that people can navigate their neighborhoods in a safe and slow manner,” said Kelley Yemen, director of the Complete Streets program. Yemen says her office chose Fairhill for the first zone, based on its crash history, vulnerable populations and destinations within the boundaries.

“This was really driven by the community,” she said. “Neighbors applied and we worked collaboratively to co-design the neighborhood slow zone.”

And yet, on a recent visit to the neighborhood, it was hard to find a neighbor who had participated in the process or found the measures very effective.

“This is a waste of taxpayer’s money,” said Rich (neighbors did not want their last names used), who lives in the slow zone. “You’ll see half of the [flexposts] knocked down and people parked beside them.”

He thinks the City should have installed cement posts rather than flex posts.

The City did install asphalt speed bumps, not the rubber speed cushions which are in use on the Second Street boundary of the slow zone and subject to vandalism.

“Some people slow down and other go, boop, right over the speed bump,” she said.

Another neighbor, who did not want to give his name, said cars slow down for the speed bumps but speed up in between.

Johnny said the speed bumps had not made him feel safer when walking.

“I don’t trust cars even with speed bumps,” he said.

Studies have shown that speed bumps reduce speeds by 40 percent and lead to fewer crashes.

One bicyclist said she did feel safer riding her bike with the measures in place.

Yemen says the City will study the results of the project and in the meantime is moving ahead with “scaling up” neighborhood slow zones.

A second one is nearly completed near Willard Elementary and three more are in the planning stages—near Cramp Elementary, in West Passyunk and the Tenth Memorial Way neighborhood.

Editor’s Note: An earlier version of this story misstated the location of rubber speed bumps. They are on Second Street, a boundary street, and not within the slow zone itself. All slow zone speed bumps are made of asphalt.