PHILADELPHIA (KYW Newsradio) — October is Mural Arts Month in Philadelphia, and the festivities kicked off a little early with a new mural celebrating the city’s transgender community.

The project, titled “We Are Universal,” was unveiled Tuesday on Frankford Avenue in Fishtown. The bright hues are matched with the words:

we’re trans
we’re survivors
we are joyful
we feel rage
we are UNIVERSAL!

🌈We’ll be at @CakeLifePhilly at noon tomorrow in partnership with @DBHIDS and Intellectual disAbility Services and Niarchos Foundation! Join us as we celebrate the dedication of the Morris Home mural We Are Universal and the kickoff of #MuralArtsMonth, presented by @Chase! ❤️ pic.twitter.com/oyD5Tn5G82

The giant mural is painted on the side of Cake Life Bake Shop, near Thompson Street, which is run by female and transgender owners.

Two people are depicted on it. One is Tazmere Stephens, a resident of Morris Home, the country’s only trans-focused recovery house.

“For so many of us, our voices are silenced even before we get a chance just to live, just to be,” said Stephens. “It’s a big responsibility to show up and show out for my community.” 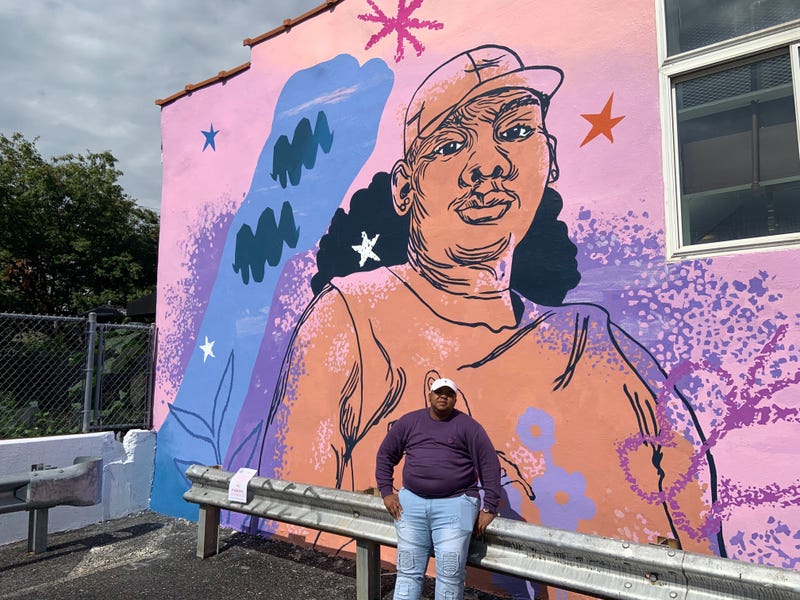 Tazmere Stephens stands in front of the “We Are Universal” mural in Fishtown, which was dedicated on Sept. 28, 2021. Photo credit John McDevitt/KYW Newsradio