PHILADELPHIA (KYW Newsradio) -- The CEO of the group Philly Fighting COVID, which the city distanced itself from this week, has admitted that he took doses of the vaccine home with him to administer to four of his friends, even though he does not have medical qualifications.

He told NBC's Stephanie Gosk that he didn’t want the doses to go to waste after trying at the last minute to find people to get the shot.

"I stand by that decision. I understand I that I made that mistake. That is my mistake to carry for the rest of my life. But it is not the mistake of the organization," he said. 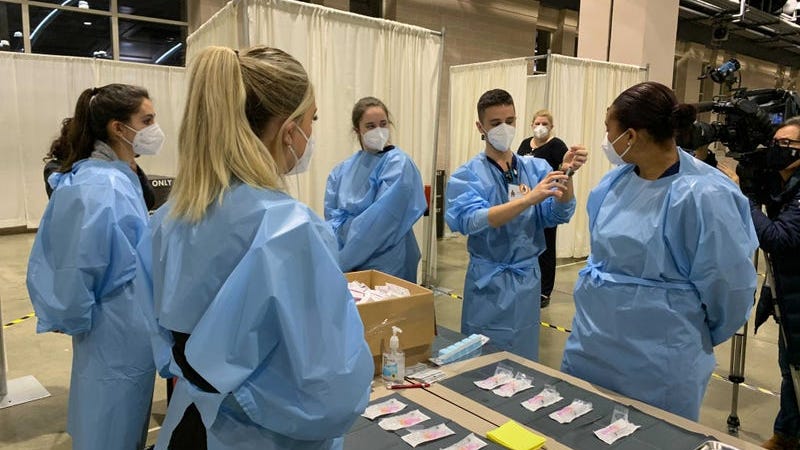 Doroshin said he had undergone the company's internal certifications but admitted he was not qualified to administer the vaccinations.

The group had been running a mass vaccination clinic at the Pennsylvania Convention Center, and prior to that, had been administering coronavirus testing in the city. The Philadelphia Department of Public Health ended its relationship with Philly Fighting COVID after it flipped from nonprofit to for-profit status without telling the city.

There was also concern that PFC’s privacy policy left the door open for the organization to sell data it got from the thousands of people who pre-registered for a vaccine with them.

City health officials say that an audit of the vaccine doses given to Philly Fighting COVID found "no evidence that vaccine was wasted, stolen, or otherwise misused."

"The Health Department tracks doses administered in all vaccination sites by what is uploaded into the city’s vaccine registry. We give our provider partners, for example, 500 doses. At the end of the day, the number of doses we get returned, when added to the number of new records in the database listed for that site, should equal 500. At each of the PFC clinics, this was the case.

"If someone from their operation administered doses off-site and entered those people’s information into the database, there’s no way for us to know. The vaccine they were provided with is good at room temperature for up to six hours once taken out of refrigeration.

"This does raise serious concerns about Mr. Doroshin’s conduct, and we imagine that the district attorney or attorney general would be interested to learn more."

In fact, the offices of state Attorney General Josh Shapiro and Philadelphia District Attorney Larry Krasner are looking for tips from anyone who may have witnessed suspicious activity.

In addition, some city councilmembers are calling for an investigation into how Philly Fighting COVID got approval to run the Convention Center clinic. City Councilmember Cindy Bass is expected to introduce a resolution Thursday to hold hearings about the organization.

The city is now working to schedule second doses for the 7,000 people who got vaccinated at the Convention Center in recent weeks.