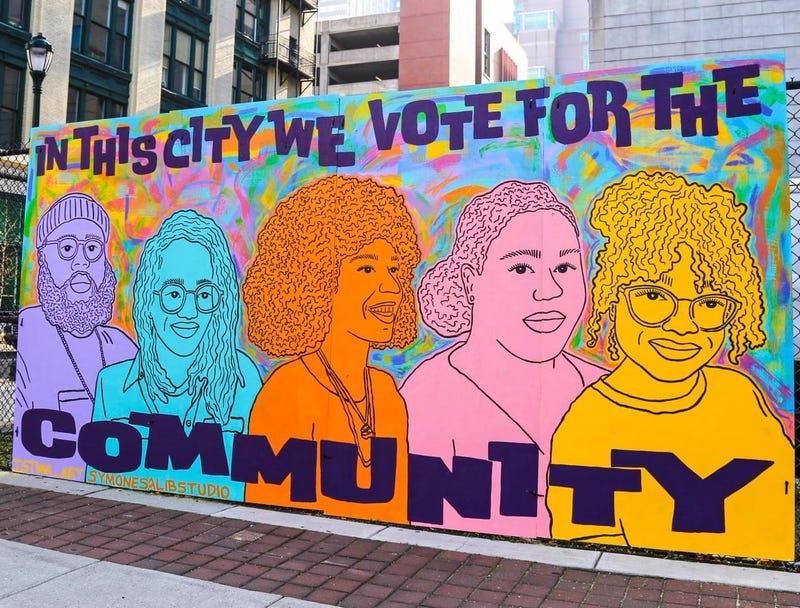 A new temporary mural called “We Did That,” created by artists Letisha Golafaie and Symone Salib, recognizes Philadelphia civil rights and community advocates who have been at the forefront of Philadelphia election history. The mural stands across from the Pennsylvania Convention Center, where the city counted its ballots. Photo credit Kyle Everett
By Shara Dae Howard, KYW Newsradio

PHILADELPHIA (KYW Newsradio) — A new temporary mural that recognizes Philadelphia civil rights and community advocates stands near one of the focal points of the 2020 presidential election.

At 13th and Arch streets, the mural, called “We Did That,” depicts Black and brown organizers who have been at the forefront of Philadelphia election history: Rasheed Ajamu, Letisha Golafaie, Samantha Rise, Nikki Grant and Nelini Stamp, according to Mural Arts Philadelphia.

The mural reads, “IN THIS CITY WE VOTE FOR THE COMMUNITY.”

It stands across from the Pennsylvania Convention Center, where Philadelphia counted its ballots. Outside, marathon demonstrations turned to dance parties in the streets, where protesters demanded every vote be counted.

“The hope is that we start celebrating from the ground up,” said Letisha Golafaie, who painted the mural with Symone Salib.

Golafaie said the mural is a tribute to the Black, brown and queer Philadelphia civil rights advocates who organized efforts encouraging people to vote.

“There are a lot of people I would have liked to put on the mural. Organizers in Philly were my inspiration. They’re amazing and deserve praise,” she said.

Ajamu, who is featured on the mural, runs Phreedom Jawn, a social media account that elevates Black stories and opportunities. He insists his advocacy work is a continuation of those civil rights organizers from the past.

“Liberation, struggle movements are nothing new. We take influence from the past and this is how we honor those who came before us, and making sure that we keep showing up,” he said. “We’re celebrating those Black and brown organizers who had contributed to so many successes here in Philadelphia, including those getting out and spreading the word to vote.”

Salib and Golafaie worked fast to ensure the mural was installed before Inauguration Day.

“Praising our community as Black people and Black artists — let’s start doing this for ourselves,” she added.