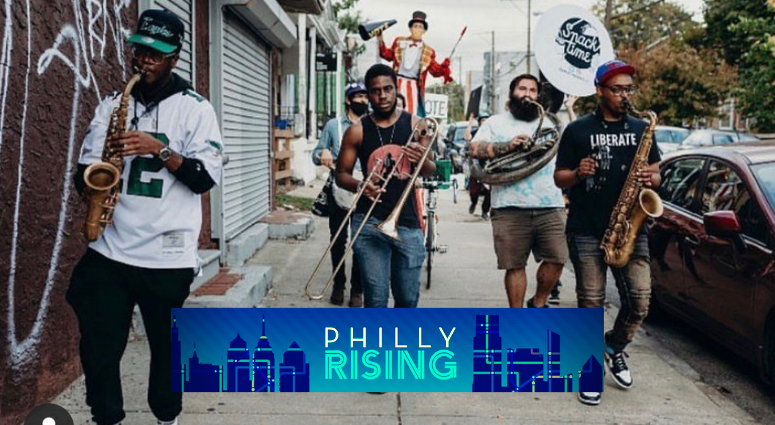 PHILADELPHIA (KYW Newsradio) -- Through the chaos of a global pandemic and a contentious presidential election, Snacktime Philly brass band has brought a taste of normal life to the city, from polling places to city parks, while urging fans of live music to help support local artists.

“Throughout the pandemic, a lot of people’s industries have been destroyed with there being no live music," said Sam Gellerstein, sousaphone player for the band. "We decided we were sick of waiting around. I was like: Cool, we’ll just get a street band together."

He says the band has about 10 musicians on rotation, performing every weekend at outdoor locations for socially distanced, masked crowds. You may have seen the group on social media or live at Rittenhouse Row or Passyunk Square.

"It feels like we’re right back at home, to be honest, playing for the people," said Yesseh Fura-Ali, a saxophonist.

He, like many in the band, are music teachers.

"We’re all going through the same thing together. That’s one of the main reasons why we love to do what we do, is because of the people, because of that human interaction," said saxophonist Ben Stocker. "It just started with us going out there and hustling, seeing what we could make happen."

Stocker says their ability to make music and to entertain -- and, for some, their ability to earn a living -- has been disrupted. Their passion, however, has not. Snacktime Philly pop-up performances have given them back a small part of that life.

#ElectionDay in South Philly y’all! Voters enjoying some 🎷🎼🥁 from #Snacktimephilly on the way to cast those ballots. pic.twitter.com/pmGEnpYpzR

"We’ve had many great nights where tons of people came out and supported us," Stocker said. "But we’ve also been out there in 30 degrees, trying to make it happen, and some nights it just isn’t. It’s up and down, but we are pushing through for our own benefit and to continue to give music to the people."

The rest of the band seems to agree that bringing tunes to the streets and filling the live-music gap during the pandemic has been a win for all parties involved.

"We have people sit there for a solid hour and a half, two hours, without their phones. It’s been really great to see the community come around us, has been really inspiring for me and everybody else," Gellerstein said.

Gellerstein says he wants people to remember not only Snacktime Philly, but also other musicians who are struggling during this time.

"Come out watch us play," he said, "but also, if you know musicians that are out of work, help them out. A lot of people need help right now. A lot of people can't afford to eat. A lot of people are struggling. Help out where you can. It’s also important for us to make sure that everyone in our direct community is doing ok, because without community there is no Snacktime."