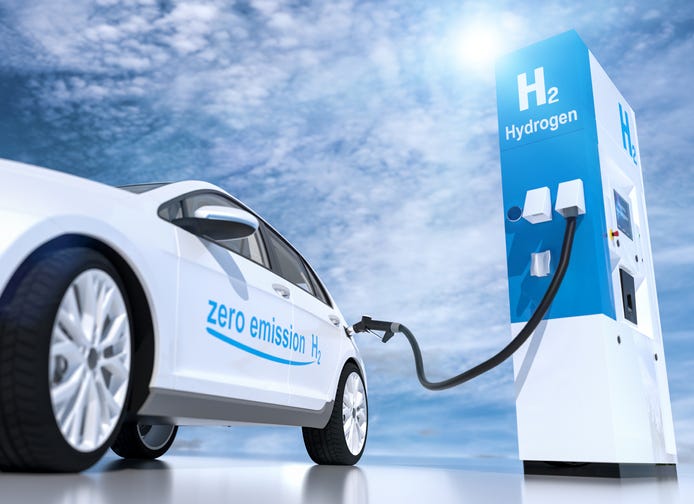 Now we have a compact verb to describe efforts to get to carbon neutrality, also known as “net-zero” emissions to the atmosphere that cause climate change, and you’ll be seeing it used more often.

Quick review: the accepted consensus among climate scientists is that by the year 2050, humans need to get carbon dioxide emissions down to zero in order to stabilize global mean temperatures. President Joe Biden has signed on the Net-zero-2050 goal and has officially rejoined the Paris Climate Agreement. Last month, Philadelphia announced its own commitment to carbon neutrality by mid-century. The race is on.

Industries are increasingly taking steps to decarbonize. Shipping giant Maersk has announced it will launch the world's first carbon neutral cargo ship in 2023 to run on fuel from renewable sources or sustainable biomass. Fun fact: maritime emissions account for around 3% of global carbon dioxide output, right up there with aviation.

Ford is pouring over $1 billion into its plant in Cologne, Germany to convert it into a production site for electric vehicles, in a technology partnership with Volkswagen. Fun Fact: in eleven states, automakers that can’t sell a certain percentage of zero-emissions vehicles by 2025 have to buy regulatory credits from another automaker that can; electric vehicle maker Tesla makes far more money selling these credits than it does selling cars.

Even carbonated beverages are decarbonizing: Sprite is ditching green plastic bottles because clear ones are more easily recycled and Coca Cola will soon be showing up on shelves in a new 13.2-ounce recyclable bottle which — for the first time — is made from 100% recycled plastic.

Thumbs up for voluntary moves, but major financial trade groups are even pushing for some type of carbon pricing in the United States to, essentially, make sure the polluter pays the tab for the effects of its emissions. It’s a market-based solution that can take many forms, from taxes to credits to a cap-and-trade system, among other mechanisms. (See the Tesla regulatory credits item above.)

State Rep. Greg Vitali, who represents Delaware and Montgomery counties, believes Pennsylvania can make some moves toward a Net-zero 2050 in spite of a state House showing little interest in battling climate change.

In a widely reprinted editorial this month, he suggests that Pennsylvania can:
- Join the Regional Greenhouse Gas Initiative (RGGI), a cap-and-trade carbon pricing program focused on greenhouse emissions from the electric power sector

- Enact legislation so that customers could contract with community solar facility operators to receive electricity at a set price and get a credit for it on their bills.

“These measures are possible because they can be done either by Gov. Tom Wolf through executive action or have the support of interest groups beyond the environmental community such as utility companies, labor unions or farmers," he wrote.

Or private citizens! Tech pioneer and philanthropist Bill Gates has written a new book on climate change and in interviews to promote it, calls citizen advocacy one of the most important daily changes we each can make to move the needle away from higher mean global temperatures:

“(U)se your voice to advocate for practical plans that will help the world eliminate greenhouse gases and get us to net-zero by 2050. That includes, for instance, calling on national politicians to fund more clean energy research and development. We have a great opportunity because of the passion of activists and young people who have made their voices heard, and now we need to demand that our leaders not just make big commitments, but show the courage to implement the plans we need to reach our goals," Gates wrote.

Green Philly’s list of local advocacy groups that would welcome your energy is a great place to start. Moms Clean Air Force is a wealth of climate actions you can take on the state and national level. Bookmark both sites for more ideas and events through which to channel your green vibes.

BONUS EVENT: This weekend get back in touch with your green thumb at a free Food, Farming & Philadelphia Webinar Saturday, Feb. 27 at 10 a.m. Register here.