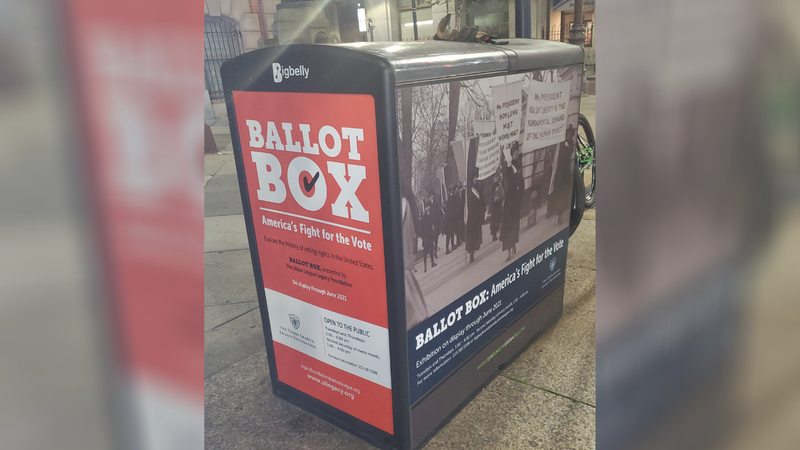 The signs were posted as an advertisement by the Union League Legacy Foundation — a separate entity of the Union League of Philadelphia — for an exhibit on voting, called “America’s Fight for the Vote.”

The signs appeared on two BigBelly trash cans — at 15th and Sansom, and Broad and Sansom — which seemed to confuse passersby. Some Twitter users misinterpreted the signs as a mockery of a ballot drop-off box.

Spotted in Philly, in case you don't think misinformation and voter suppression is happening. https://t.co/Vm8k5lb5GO

A spokesperson for the Philadelphia District Attorney’s Office said the Election Task Force received “at least one complaint about the misguided ads,” and the Union League quickly remove them “to avoid confusing the public.”

“Somebody was confused that this was an actual ballot or something,” said John Mako, executive director of the nonprofit. “That is not the intention at all.

“The intention was to draw people into our exhibit, so we apologize for that misunderstanding.”

We understand there was confusion about ads installed, since removed, on trash cans, for our exhibit on voting rights. Please accept apologies for any misunderstanding. Ballot Box is an exhibit on the history of voting rights & the importance of voting & civic engagement. pic.twitter.com/aDxZ6qtJJH

The city said both trash cans were inspected for ballots, and none were found.

In all, the posters were up for about two hours before complaints started to roll in.

The backside of the ad has a full explanation of the exhibit, which is about the history of voting rights in the U.S. It highlights Octavius Catto, Black citizens, the civil rights movement, and women’s suffrage.

The exhibit, which Mako said intends to educate and encourage voters, is free and open to the public.

The city had previously approved the signs.