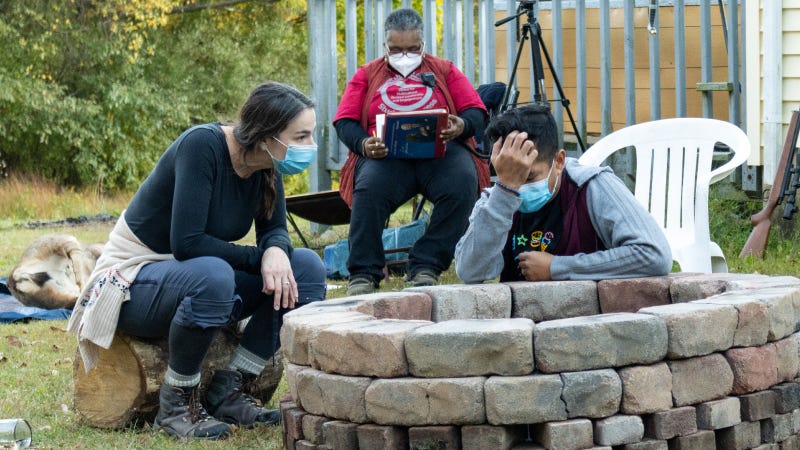 The crew and cast of Will Arbery’s “Heroes of the Fourth Turning” during outdoor rehearsals. Photo credit Christopher Colucci
By Kim Glovas, KYW Newsradio 1060

PHILADELPHIA (KYW Newsradio) — A Philadelphia theater company took it’s show on the road, literally, during the pandemic. The experiment is one of the first of its kind in the country, and other theater companies are watching closely.

The crew and cast of Will Arbery’s “Heroes of the Fourth Turning” was supposed to be performed at the Wilma Theater this fall. But the pandemic changed that.

Instead, they quarantined for two weeks, then headed to the Poconos to perform the play at an Airbnb. They had no audience, but they were able to interact with each other in the “artistic bubble.”

Artistic director Blanka Zizka said she always dreamt of an artistic commune, and now it has happened.

“It’s kind of interesting how COVID brought so much crisis into our lives, but also creates new opportunities and possibilities,” Zizka said.

The play is being filmed on camera without an audience, which is a different medium for this group.

“There’s a lot of gray area in terms of what is film and what is movie, and what crosses into that world, and then what is staying true to the theatricality of the piece. We don’t have to project to people in the last row of the house,” actor Justin Jain said.

Zizka added working with a film crew is a totally different energy.

“With the camera you have to allow the camera to become your private companion, to get inside your soul,” she explained, whereas in the theater, they rely “on the energy of the actors.”

Actor Campbell O’Hare said being quarantined beforehand made the performance even more special.

“We’re extremely privileged to get to be here together, and that when we go back home, we’re not going to have moments like this for awhile, until it’s safe to. So we are very aware of how precious this is,” O’Hare said.

Zizka said the performance was already taped and November will be dedicated to editing.

Jain said as the pandemic rolls on, theater companies across the country are watching to see if the Wilma’s artistic bubble is a success.

The play, which investigates narratives, actions, and moral bargaining of a group of conservative Catholics in Wyoming who all voted for President Trump in 2016, will likely be streamed in December.