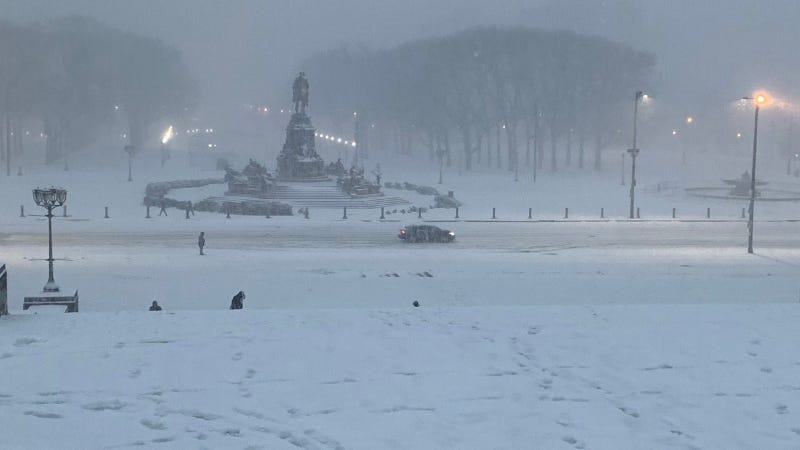 PHILADELPHIA (KYW Newsradio) — The Philadelphia region experienced its first big winter storm of the season on Wednesday. While driving conditions became dangerous in some parts of the area, many spent the day enjoying the snow with friends and family.

Driving conditions deteriorated throughout Wednesday as the snow came down, but that didn’t stop people from doing what they wanted to do.

Some, like Benzina Herring, did some shopping before hunkering down at home for the rest of the day.

The snow was also a perfect situation for family bonding. Pat Crowe took his four young children to the grocery store before heading home to play in the snow.

And the kids’ favorite part of the snow? Making a snowman.

The Philadelphia Museum of Art was also a popular sledding spot for many in the city, and some even came with tubes and toboggans.

“It’s a nice thrill. It’s fun. I went down and kind of fell off the steps a little bit. It was a little bumpy but I made it out alright,” said Rowan Williams, who showed up with his friends.

Meanwhile, roads were covered with snow, which made driving around difficult because of reduced visibility, and some spots were slippery.

While precipitation started to break up around Philadelphia in the evening, some areas will experience rain or sleet throughout the night.

Randy Padfield, director of the Pennsylvania Emergency Management Agency, is asking people to stay home while it snows, and afterwards.

Conditions getting worse here in Media, Delaware County. This is Front and Jackson Streets just before 4PM. @KYWNewsradio pic.twitter.com/Hj47qyef4x

“There are after-the-storm snow removal concerns. We see people with medical conditions exert themselves on a regular basis after the storms and unfortunately end up with heart attacks or other medical emergencies that require 911 and emergency medical emergency services. We really wanna make sure that people are being safe,” Padfield said.

Padfield said the day after a snowstorm is one of the busiest days for the ER, and any extra accidents could add to the strain emergency rooms are already facing.