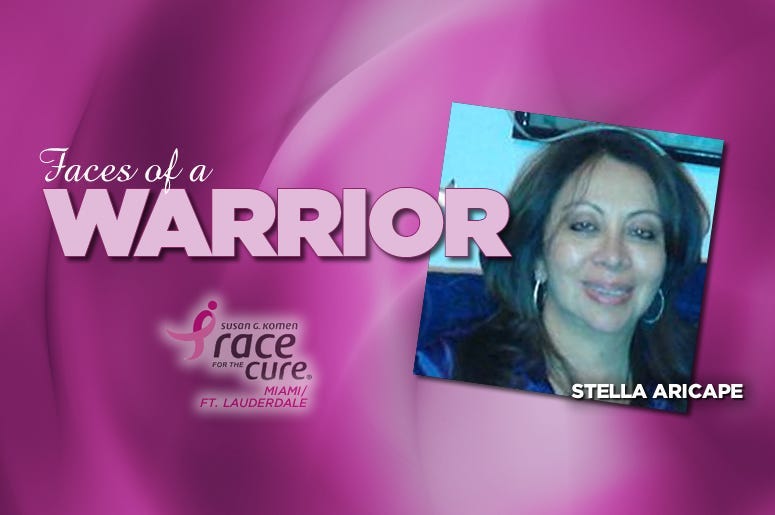 Age: 58Profession: Real Estate AgentType of Breast: Ductal Carcinoma In-SituYear of Diagnosis: 1997Number of years as a survivor: 20Relationship to Susan G. Komen: Race ParticipantFrom an early age I suffered pain and sensitivity in my breasts. I was told that this was due to the dense nature of the breast tissue. In 1997 I was diagnosed with atypical cells. My initial thought and question for my doctor was if I had cancer; he told me no, but that I should be vigilant. He carefully explained that as the atypical cells keep dividing, they become more abnormal, and thus may develop into breast cancer. My doctor directed me to get a mammogram every 3 months; I did.Even though I wasn’t diagnosed with cancer, I was shaken. At 38, the idea of getting ill and leaving my two teenage children alone was terrifying. I remember turning to God and praying for Him to take reign over my problem. Six short months I was diagnosed with Ductal Carcinoma In-Situ. I received the diagnosis of breast cancer with much uncertainty. At the time, it was not known if I had metastasis or the stage of the cancer. My doctor recommended a radical mastectomy, but I needed a second opinion. I sought another doctor, whom had the same opinion.As if I was in a bad dream, a new year was beginning but I was completely stuck on the word “cancer.” During the treatment, my mood and body changed drastically. I suffered from depression, I had bone pain, and lack of sexual desire. As my doctor had recommended, I tried to prepare myself for a battle as a soldier for a war, but many times the side effects were heavily burdensome.Two years after my initial surgery, as a precaution, my doctors and I decided it was best to have a hysterectomy. Throughout the years that followed, I was diligent to follow through with all my appointments, specially my mammograms. To my surprise, in 2012 I was once again diagnosed with Ductal Carcinoma In-Situ. The doctors were not able to explain this reoccurrence, except for the belief that the carcinoma reformed from breast tissue that was inadvertently left behind during my surgery 15 years prior. My second bout with breast cancer proved to be even more challenging than the first. To add to the worst of my fears, I had a green-liquid secretion from my breast, this meant that my body rejected the tissue used for the reconstruction. The infection that developed was reluctant to heal. In the end, the reconstruction was not what I had imagined, but I am grateful to God because I'm still alive. Through it all, the support of my family and my faith in God were very important. I learned to keep all my follow up appointments. In doing so, I was lucky that last year a benign tumor was discovered and removed from my pancreas. I know that the time I devote to monitoring my health was a key factor in my success. I am fortunate to be able to be give my testimony, and hope that my journey serves as a lesson and inspiration to others. _______________________________________________About the Faces of a Warrior CampaignIn 2015, to celebrate the 20th Anniversary of the Komen Miami/Ft. Lauderdale Race for the Cure®, Susan G. Komen Miami/Ft. Lauderdale teamed with 101.5 LITE FM to launch the Faces of a Warrior campaign. To mark the 22nd Annual Race for the Cure®, Komen is spotlighting 22 survivors to represent each year the Race has run. These individuals are sharing their stories of strength and resilience -- not just of surviving breast cancer, but thriving in spite of it.Read the stories of more Warriors hereFor more information on the Faces of a Warrior campaign -- and other ways you can get involved in the Race for the Cure® -- please email race@komenmiaftl.org or call 954-909-0454