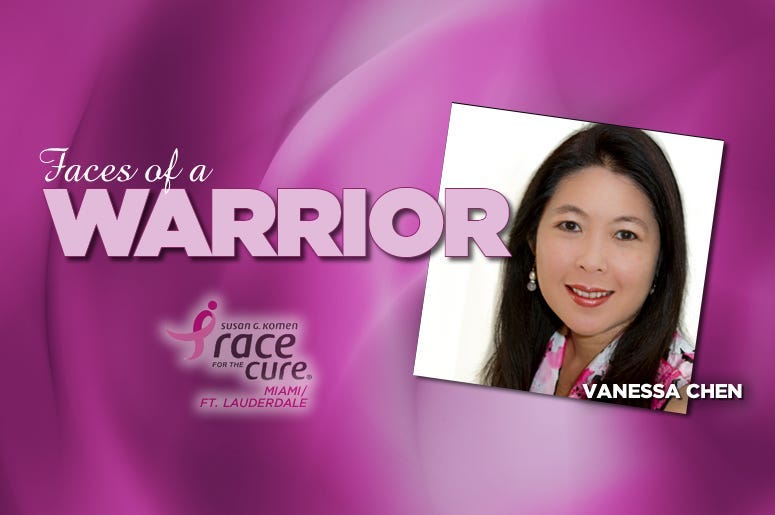 Age: 44Profession: Information Technology ManagerType of Breast Cancer: Ductal Carcinoma In SituYear of Diagnosis: 2001Number of years as a survivor: 16 yearsRelationship to Susan G. Komen: Race participant; VolunteerI was diagnosed with Stage 1 Ductal Carcinoma In Situ just days after my 28th birthday. This diagnosis was startling as I was not even 30, had no family history of cancer, and no prior health concerns. I discovered a lump during a self-awareness exam and immediately thought “it’s probably nothing. I am too young to have cancer.” My doctors initially agreed, but decided to run some tests to make sure. After a mammogram, ultrasound and needle aspiration, they confirmed “You Have Cancer.” Despite the memory loss and “chemo-brain”, you never forget where you were when you first heard those three words.In May 2001, I had a mastectomy, followed by four difficult rounds of chemotherapy and reconstructive surgeries during the subsequent eight months. My first round of chemo left me dehydrated and resulted in a hospital stay.  I continued to work between rounds of chemo, taking a few days off to recover enough to go back to the office. It was after my second round of chemo that I recall standing up at my desk and noticing the massive amount of hair that had fallen out. I worked from home for the rest of that week before mustering up the courage to return the week after with my new “hairless-do,” aka my wig.As expected, some days were tougher than others. But, through it all, I had such unwavering love and support of family, friends and colleagues. Some have commented about how strong I am, but that strength has come from my faith in God and the support system I’ve been so fortunate to have. I credit Komen with providing me with the awareness I needed to know that the lump I discovered was something I could not ignore. I had attended the Miami/Ft. Lauderdale Race for the Cure with a friend a few years before my diagnosis and have continued to promote the Race as part of Team FPL. With the help of my parents, I have also baked hundreds of Pink Ribbon Cookies that we have sold at bake sales supporting the Race.I feel blessed to have become a Survivor at such a young age. My diagnosis was a wake-up call to enjoy and be thankful for the little things each day brings, to not take anything or anyone for granted, and to live life to its fullest. I’ve learned that it’s important to stay positive and that as dark as a day may seem, there is always a little glimmer of light. With FAITH I found the hope, love, strength and courage to beat cancer. As a 16-year Survivor, I feel responsible for sharing my story with others in hope that it helps spread the importance of early detection, self-exams and regular screenings. Being a Survivor means being there to support others who are fighting their own battle and celebrating with fellow Survivors. Survivors are proof that there is life after cancer.
_______________________________________________About the Faces of a Warrior CampaignIn 2015, to celebrate the 20th Anniversary of the Komen Miami/Ft. Lauderdale Race for the Cure®, Susan G. Komen Miami/Ft. Lauderdale teamed with 101.5 LITE FM to launch the Faces of a Warrior campaign. To mark the 22nd Annual Race for the Cure®, Komen is spotlighting 22 survivors to represent each year the Race has run. These individuals are sharing their stories of strength and resilience -- not just of surviving breast cancer, but thriving in spite of it.Read the stories of more Warriors hereFor more information on the Faces of a Warrior campaign -- and other ways you can get involved in the Race for the Cure® -- please email race@komenmiaftl.org or call 954-909-0454