The Bruins are now halfway through their preseason schedule after Saturday’s 4-0 win over the Flyers, so it seems like a good time to project the opening night roster.

While much of the roster appears to be relatively set, there are still some key spots up for grabs on defense and in the bottom six up front.

Brad Marchand, Charlie McAvoy and Matt Grzelcyk will all miss the start of the season as they recover from offseason surgeries and can be placed on injured reserve, so we are not counting them as part of the opening night roster.

Here’s what we’ve got:

The top six seems set, at least until Marchand returns and bumps Zacha down to the third line. (UPDATE: Hall now being considered "week-to-week" as of Sunday could change that.) Two-thirds of the third line is set with Coyle and Smith.

Left wing on that line is very much up for grabs. Frederic spent time there last season and got the first look there in camp, but a quiet night on Tuesday against the Rangers combined with Greer’s coming-out party led to Greer getting promoted for the rest of this past week. Coach Jim Montgomery and general manager Don Sweeney have both insisted the best players will play. Right now, Greer looks like a better player than Frederic.

The fourth line and extra forward are the most in-flux parts of the roster. There are cases for and against not just the four players we have making it, but also Tomas Nosek, Chris Wagner, Oskar Steen and Johnny Beecher.

Foligno says he feels healthier and better than he did at any point last year. The Bruins can afford to give him a couple months to prove it until Marchand and McAvoy return and the team needs to clear some salary. He has made some positive plays this preseason, but hasn’t jumped off the page. Make no mistake: Foligno needs a strong start if he and his $3.8 million cap hit are going to stick around for more than a couple months.

Frederic is competing with Greer and Foligno for those third- and fourth-line left wing jobs, but may very well be in third place right now. He has come on late in both preseason games he’s played, but has been too quiet out of the gate. That’s not good enough. The Bruins will want to keep Frederic around because they still believe he has more upside than he’s shown, and they risk losing him on waivers if they cut him. Right now, though, it looks like he has work to do to crack the everyday lineup.

Studnicka is out of waiver options, meaning he either makes the opening night roster or potentially gets claimed off waivers with the Bruins getting nothing in return. While Studnicka’s stock has dropped a little the last couple years, it still seems unlikely the Bruins would be willing to risk that. Studnicka had a quiet first preseason game, but looked much better on Tuesday and showed that he can make some good things happen when he’s on his game. A fourth-line role may not be the ideal spot for him, but he’s a good enough two-way player and does have experience killing penalties. And there’s nothing wrong with having some offensive creativity here.

Studnicka will have to beat out Nosek for that fourth-line center job. There is still nearly a week and a half for that battle to be decided before opening night, but right now we give the edge to Studnicka. The arguments for Nosek would be his positional versatility, his penalty-killing, and the fact that he is easily the best left-shot faceoff man on the team, with the possible exception of Beecher. That may not outweigh his lack of offense. Nosek scored zero goals over the final 57 games last season. In 23 five-on-five minutes this preseason, he doesn’t have a single shot attempt and the Bruins have been out-attempted 18-11 (37.9% Corsi). It’s getting harder to argue that Nosek is one of Boston’s 13 best forwards right now.

McLaughlin could get sent down simply because he’s one of the only guys in this conversation who wouldn’t have to go through waivers. But if the Bruins are being honest when they say the best players will play, then McLaughlin certainly looks like one of the 12 best forwards right now. He scored two goals in Saturday’s win over the Flyers, led the team in shots, and had the second-best Corsi-for percentage. He’s physical, he can kill penalties, and he’s maybe the best finisher in this whole fourth-line field. It would certainly seem like the Bruins’ best fourth line right now has McLaughlin on it. 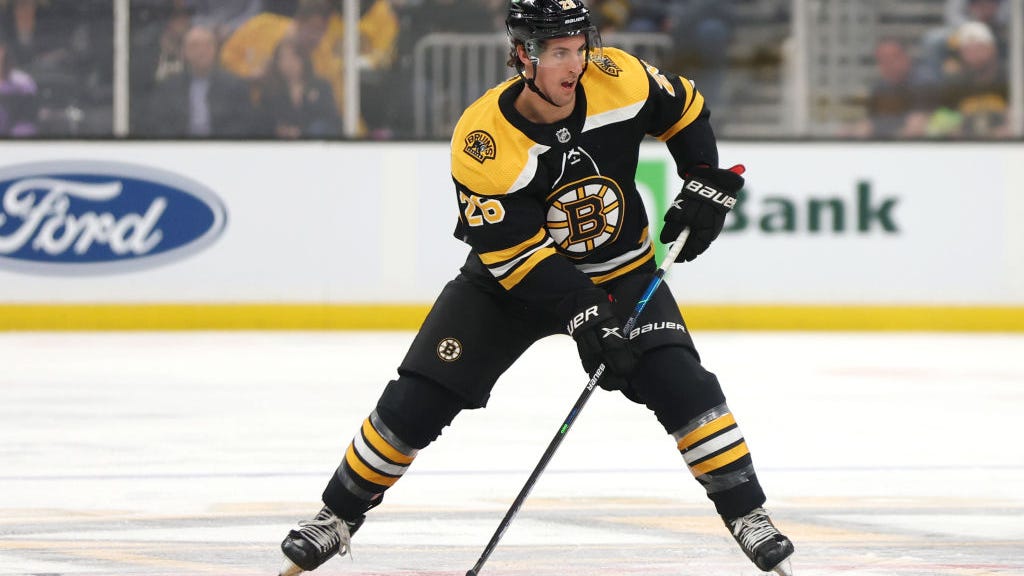 Beecher also scored two goals on Saturday, although one was off his skate and one was an empty-netter. Like Nosek, he could bring value as a left-shot faceoff taker and penalty-killer. His size and skating are real assets as well. However, some time in Providence would be valuable as he continues to develop his offensive game.

Wagner has brought plenty of effort and physicality this preseason, and it’s clear that he doesn’t want to get sent down to Providence again like he was last season. Give him credit: He’s made it a tougher decision than it may have seemed when camp began. However, we still have him on the outside looking in.

Cutting Steen would mean the Bruins risk losing the 24-year-old right wing on waivers. That’s not ideal, but it’s also no guarantee he would get claimed. Steen bounced back from a quiet preseason opener with a strong game on Tuesday, including scoring a shorthanded goal. He might have to beat out McLaughlin (at the very least) to make the team, though, and right now we don’t have that happening.

Top prospect Fabian Lysell, who suffered an injury Saturday that Montgomery called minor, gets sent down here. That shouldn’t be surprising. There’s no rush to get him to Boston, and some developmental time in Providence will be good. His skill set doesn’t really fit a fourth-line role anyways, and the Bruins’ top six is pretty set right now.

The defense seemed to be pretty set going into camp, with the only question being whether the seventh D would be Jack Ahcan or someone else.

But then the Bruins brought in the veteran Stralman on a PTO (professional tryout) and things got a bit murkier -- in a good way. Stralman has looked good so far, and he was particularly calm, confident and poised playing next to Lindholm in Tuesday’s preseason game.

The Bruins would still need to sign Stralman to a contract -- possibly something similar to the one-year, $800,000 deal Calvin de Haan just signed with Carolina -- but right now we’re leaning toward him making this team and playing a fairly sizable role early on. I would add, though, that his spot on the top pairing shouldn’t be viewed as a classic top-pairing role where he and Lindholm are both playing 24 minutes a night. Lindholm will do that, no doubt, but we see Stralman more in the 18-20 range.

The remaining five spots, in this scenario, would seem to be pretty locked in, although there’s room for shuffling between pairs and who’s in or out of the lineup on a given night. Lindholm, Reilly and Zboril are the Bruins’ three best puck-moving D until McAvoy and Grzelcyk return, so having one of them on each pair could provide some good balance. Reilly looked very good on Tuesday and could benefit as much as anyone from Montgomery's more aggressive system.

Forbort-Clifton was the Bruins’ go-to third pairing last season, and certainly could be again, but it wouldn’t be surprising if Montgomery wants more transition and offensive ability there than Bruce Cassidy did. A couple tough shifts Saturday against the Flyers didn’t help their case to be an every-night pairing. Zboril had a quieter game this Saturday than last Saturday, but Montgomery on Friday called him one of the five best players in camp to that point.

Of course, once McAvoy and Grzelcyk do return, this becomes a very crowded blue line, and at least one player will almost certainly be on the move in one form or another. That’s a bridge the Bruins will cross when they get there.

Ahcan can be sent to Providence without waivers, and playing every day there may be better for him than being the seventh D in Boston anyways. Offseason signings Dan Renouf and Connor Carrick get cut and either bring some veteran experience to Providence or catch on with another team. Carrick is currently day-to-day with an upper-body injury.

The easiest position to project. The only question here is how Montgomery divvies up playing time and whether he rides a true No. 1 or splits starts roughly 50/50.