It was a simple enough Twitter poll, just to gauge the mood of Bruins fans. If Patrice Bergeron retires, and the Bruins are able to free up enough cap space, should they sign Nazem Kadri?

Understandable. Kadri has been one of Bruins fans’ most hated opponents in recent years, and for good reason.

In two straight playoff series between Boston and Toronto in 2018 and 2019, Kadri got himself suspended on a pair of dirty plays -- first a hit to the head on a vulnerable Tommy Wingels, then a crosscheck to the head of Jake DeBrusk. The second suspension prompted the Maple Leafs to essentially give up on Kadri and trade him to Colorado.

Kadri got suspended in the playoffs again as a member of the Avalanche last season when he hit St. Louis’ Justin Faulk in the head. The instinct to just stay away from him and not have to reckon with that history is perfectly reasonable.

The fact that Kadri is coming off a career year and will turn 32 at the start of next season could push the free agency bidding war this summer into an uncomfortable territory, with his next team potentially needing to sign him into his late 30s. Saying no thanks to that would be understandable as well.

But… maybe we shouldn’t be so quick to dismiss the possibility of the Bruins going after Kadri.

Again, this is probably only worth discussing if Bergeron decides to retire and David Krejci doesn’t return. If Bergeron does return for a 19th season, the Bruins A) probably won’t have enough cap space to sign one of the top free agents anyways, and B) can probably be a little more selective when it comes to acquiring another center, if they even get one.

If Bergeron retires, though, the Bruins need a No. 1 center, or someone pretty close to it, if they have any hope of being competitive next season. They don’t have one on their current roster -- Erik Haula and Charlie Coyle are arguably not even No. 2 centers -- and they don’t have any center prospects that look close to being ready to take on that kind of role.

And if they're not going to get a center, then they might as well sell off pieces and start the rebuild. There's little point in hanging around hockey purgatory -- that no man's land of being a fringe playoff team that's not actively moving in either direction.

Acquiring a No. 1 center via free agency or trade is no easy task. Teams tend to make sure they lock those guys up. There is a decent case to be made that Kadri would actually be the best option among several imperfect ones.

The unrestricted free agent market doesn’t look too appetizing. In addition to Kadri, the other top center options as things stand now -- in whatever order you want to put them -- would be Claude Giroux, Evgeni Malkin, Ryan Strome and Vincent Trocheck. The field shrinks even more if any of them re-sign with their current teams before free agency begins in July.

Giroux already said no to the Bruins once -- at the trade deadline, when he exercised his no-movement clause to rule out a possible trade to Boston and force his way to Florida instead. Maybe he does an about-face a la Jarome Iginla in 2013, but let’s assume that doesn’t happen. Giroux is also 34, so he would likely be an even shorter-term fix than Kadri.

Malkin turns 36 this summer and has battled numerous injuries in recent years, playing just 74 games total over the last two seasons. He has still been a point-per-game player when healthy, though, so he could still have a couple good years left in him. You would think the Penguins will ultimately find a way to keep him and try to make another run.

Strome and Trocheck are good players in their late 20s, but they’re No. 2 centers. Either one would look good playing behind Bergeron in the lineup, but they’d probably be out of the Bruins’ price range at that point. Neither would be a remotely adequate replacement for Bergeron.

The restricted free agent market is highlighted by Winnipeg’s Pierre-Luc Dubois, whom the Jets acquired from Columbus for Patrik Laine last year. The 23-year-old power forward would absolutely be worth targeting… if he’s actually available. Again, teams generally make sure they lock up players like Dubois, and you would expect the Jets to ultimately do that.

The Jets do present another interesting possibility, though. Longtime No. 1 center Mark Scheifele publicly pondered his future with the team after the season, saying he has to see where the organization is going. That only increased already growing speculation that the 29-year-old would be on the trade block this summer, but Sportsnet’s Elliotte Friedman reported that Scheifele has not actually requested a trade yet.

Scheifele has two years left on his contract with an annual cap hit of $6.125 million. That’s good value for a player who has averaged a point per game for each of the last six seasons, and it’s also part of the reason it would cost a fortune for any team to trade for him.

Scheifele would not come without concerns, either. There have been questions about his effort, and he straight-up does not play defense (check out his player card below). His offensive production may make up for his defensive shortcomings, but the Bruins have not exactly been welcoming to players who don’t buy in defensively. While it’s possible they loosen up the reins a little next season as they search for more offense, replacing Bergeron (the greatest defensive center in NHL history) with Scheifele (legitimately one of the worst defensive centers in the league) would be a dizzying twist.

Now, circling back to Kadri. He’s probably not going to win a Selke Trophy any time soon, but he does at least play defense. He also put up 87 points (28 goals, 59 assists) in 71 games this season. He goes to the dirty areas and scores in close, something the Bruins are desperately hoping to do more of next season.

(On these cards from @JFreshHockey, blue is good, red is bad.)

In his two playoff runs with Colorado in which he hasn’t gotten suspended, Kadri has put up 24 points in 20 games, including a hat trick against the Blues on Monday.

Whether you want to believe them or not, there are stories about Kadri growing and maturing and working to not lose his cool like he did in those two playoff series against the Bruins. In the Avalanche’s current series against St. Louis, Kadri has been the calm one, even in the face of racist threats from some St. Louis fans in the wake of a collision that injured Blues goalie Jordan Binnington (a collision that was pretty clearly accidental). As various Blues took runs at him in Game 4, Kadri let them head to the penalty box alone and just kept scoring.

Any team signing Kadri would have to be convinced that he has in fact changed, and that he won’t hurt them with another lengthy suspension. He and Brad Marchand are skating on the same thin ice. Having both of them on the same team, and likely on the same line, would be a risk.

Speaking of Marchand and Kadri, the two of them actually seemed to find some sort of… alliance this season? That might be strong. Common ground? Maybe just a mutual understanding of each other?

When Marchand was snubbed from the All-Star Game this season, the one player he named as a fellow snub was… Kadri. And when Marchand got suspended six games for roughing and high-sticking Penguins goalie Tristan Jarry, the one player from outside the Bruins organization who actually voiced some support for him was… Kadri.

Maybe that’s just a “birds of a feather” thing. Maybe Marchand and Kadri would actually bring out each other’s worst tendencies. Or maybe they’d be a good match, let bygones be bygones, and this whole crazy idea could actually work. Kadri would still have to mend fences with DeBrusk if DeBrusk remains a Bruin.

Would Kadri be a perfect Bergeron replacement? Of course not. That doesn’t exist. There would be considerable risk involved in signing him -- both because of his suspension history and because you’re likely going to have to pay him through age 36 or 37.

But Kadri would be a better center than anyone on the Bruins’ roster if Bergeron retires, and he wouldn’t cost a top prospect or two like Scheifele would. All we’re saying is, maybe it’s an option that shouldn’t be dismissed so quickly. 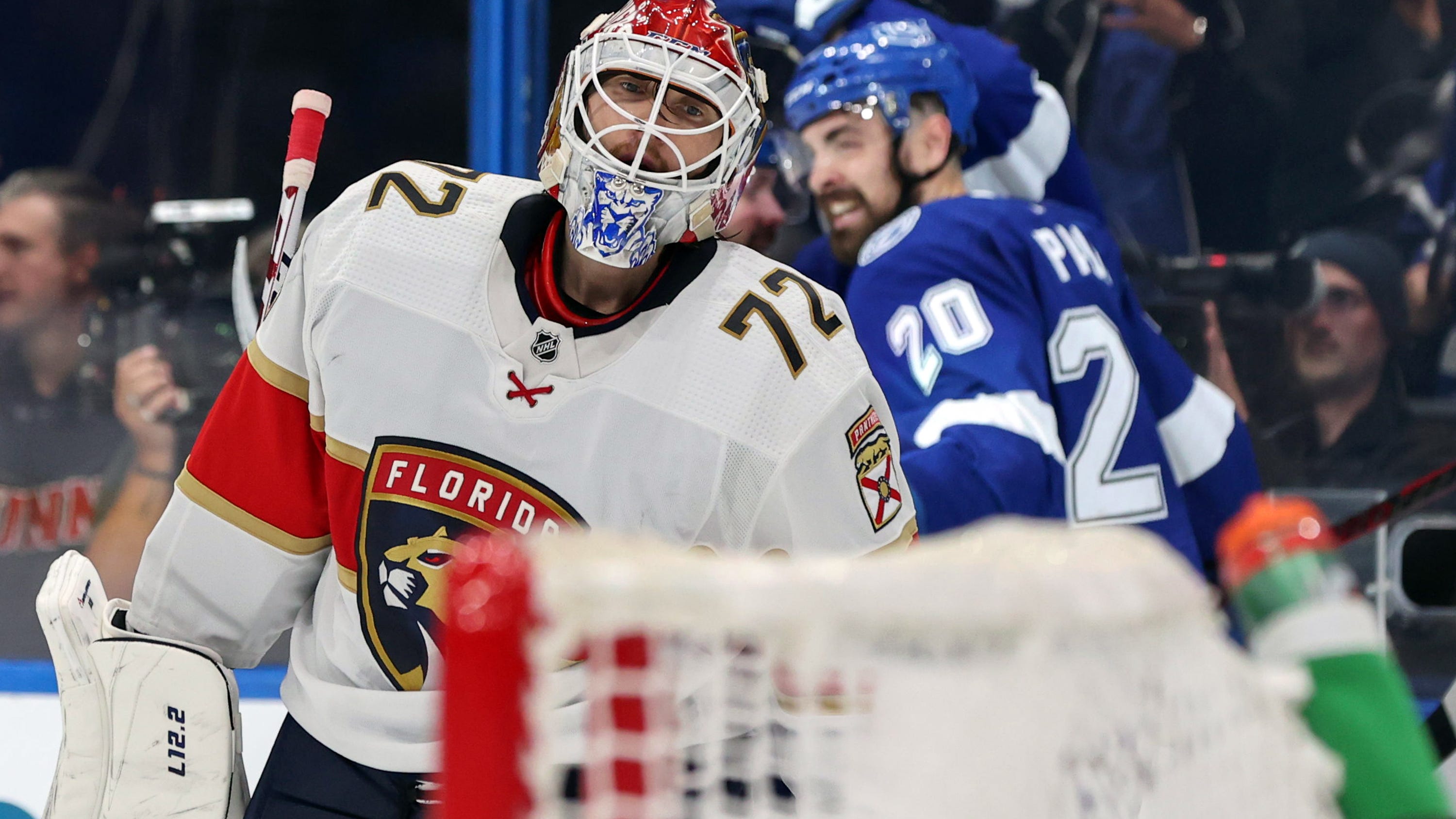 Did Panthers party at Tampa strip club before Game 4 loss?